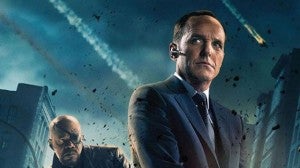 "You know The Vision is synthetic with a soul, sort of, and he's an amazing character who I loved when I used to read those comics. I love the idea of Coulson as that guy, but I don't know if that's in the cards."

That's Clark Gregg, who played Agent Phil Coulson in Iron Man, Iron Man 2, Thor and The Avengers, talking about the potential return of his character as The Avengers' resident android with Movies.com earlier today.

The star also suggested that he may return to the Marvel Universe as a writer or director, which is a role he's pretty comfortable with in general.

The idea that he loves the idea seems to be a softening of his position from earlier interviews, in which he expressed reservations about being either a superhero or an android because it would rob him of the humanity that made his character a fan-favorite.

“Vision is cool but I would hate to be any AI life form,” Clark Gregg told MTV News in a June interview. ”If I got to come back, I would need to still be somebody who could wisecrack, because my favorite part of the job was that if anybody was going to tease anybody about their diva superhero outfit or whatever, it would be me.” That’s something he told ComicBook.com as well, during our interview in May when he said that the moment he realized director Kenneth Branagh really “got” Coulson was when he saw the spot in the script where his character would approach The Destroyer armed with nothing but a bullhorn.