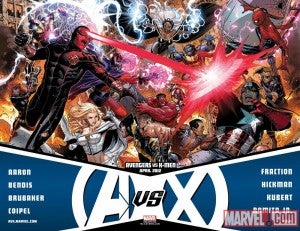 Led off by a #0 issue, drawn by Frank Cho and hitting stores in March, Marvel announced today through USA Today that their big 2012 event will be Avengers Vs. X-Men, a 12-part, biweekly maxiseries beginning in April. While big comics events in recent years have been increasingly continuity-intensive and insular, series co-writer Ed Brubaker explains that the premise for this series is incredibly simple: "It's one of those legendary ideas: What if the Avengers fought the X-Men? It doesn't get much easier to describe than that," USA Today quotes Brubaker, who will be joined behind the typewriter by Brian Michael Bendis, Jason Aaron, Jonathan Hickman and Matt Fraction, as saying. "They've become two huge franchises that the average Joe on the street 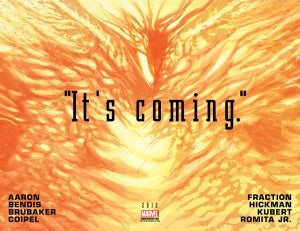 knows just from movies and cartoons and everything else," Aaron said in the same article. Art chores on the series will be handled by Adam Kubert, Olivier Copiel and John Romita, Jr.  Those eight names all appeared on a piece of teaser art first released by Marvel at New York Comic Con in October. According to a separate USA Today article, the series will be released digital day-and-date--no surprise, since Marvel has previously promised that all of their superhero titles would go that route by the end of March--but it's worth noting that physical copies of Avengers Vs. X-Men will apparently carry free digital download codes. The story revolves around Hope Summers, who may be targeted as the next host of the Phoenix Force. Given the destruction wrought by Jean Grey when she was Dark Phoenix, the X-Men want to train the teenager in order to keep her safe and under control; The Avengers want to take her into what amounts to protective custody until they can "decide what to do" with the girl.

"You've got two populations whose motivations are simple and understandable and defensible," Marvel's editor in chief Axel Alonso told USA Today. "That's part of the beauty of this. You're seeing a story that evolves out of 'What would you do?'" Certainly, there are shades of Civil War hanging over a story like this, with what seems like a political problem getting between the two groups and causing a rift that leads to fisticuffs. Of course, the X-Men titles have recently had plenty of in-fighting of their own going on, and there's the additional wrinkle of Scarlet Witch, who during Avengers Disassembled was responsible for de-powering most of the world's mutants---an act which wreaked havoc on the X-Men universe for a while afterwards. It's those complications that make the series something a little more familiar to hardcore comic book fans, and which make the title--which will trade off creative teams in a way not unlike DC's popular 52 weekly event from a few years back--something more familiar to those readers who come to expect each big event to be a natural evoution from the previous ones. Alonso told USA Today that the story is the "area of critical mass" that Marvel books have been building toward for a while.

Avengers Vs. X-Men Announced for March 2012