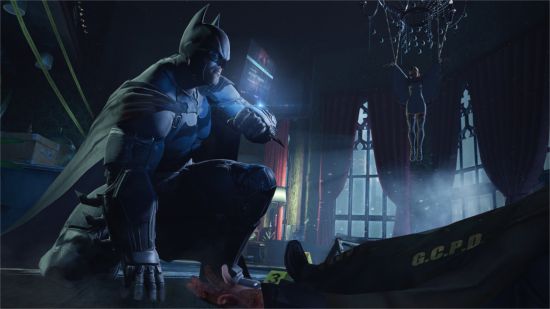 The Arkham series of games is known for being ripe with Easter Eggs for the eagle-eyed player, and Arkham Origins is no exception. For those of you that may have missed them, here are the five coolest Easter Eggs to be found in Arkham Origins, one of them which is an after the credits scene of sorts. WARNING: Potential spoilers below. 5. Queen Industries - One of the missions in Arkham Origins has you paying a visit to The Penguin's hideout, a ship at the docks named The Final Offer. Take a look around at some the crates housed on the ship and you'll notice at least one clearly emblazoned with the Queen Industries logo. Queen Industries is the company owned by Oliver Queen, a.k.a. Green Arrow. Could this be a hint at Green Arrow showing up in future DLC? Or maybe the rumor about the next Arkham game featuring an expanded roster of playable Justice League characters has some merit. 4. The Batmobile - Arkham Origins takes place early in Batman's career, when he is still developing his skills and tools. One of the tools he has yet to develop is his iconic vehicle, the Batmobile. But the Batmobile isn't completely absent from the game. Just have a look around the Bat Cave and you'll find an unfinished prototype sitting just next to a set of blueprints outlining Batman's plans for the vehicle. 3. The Flying Graysons, the Thrilling Zatanna and more - The open world of Gotham City is littered with posters and billboards that give little nods to various characters from the DC Universe. In Park Row, you'll find a billboard for Ferris Aircraft, the place of employment for Hal Jordan, a.k.a. Green Lantern. In the Bowery, you'll find a poster for Zatanna's magic show. There's also posters of Basil Karlo's - a.k.a. Clayface's - "Funny Faces," and a coming soon poster for The Flying Graysons, a nod to the origin of Dick Grayson, the original Robin/Nightwing. 2. The Red Hood - If you explore the Bat Cave, you'll find a board where Batman hangs several newspaper clippings concerning characters like the Falcones and Calendar Man. The most interesting of all of these are the ones concerning The Red Hood. If the origin of the Joker from "The Killing Joke" (and, more recently, from "Zero Year") is to be believed, there's a good possibility that those clippings actually represent the Joker before his transformation. Considering the Joker's important presence in Arkham Origins, this serves a nice bit of foreshadowing for the games' narrative. 1. The After Credits Scene - After the credits roll, patient fans will be treated to an epilogue of sorts. Deathstroke is in his cell at Blackgate Prison when he is approached by a woman who offers to get him out of prison if he'll work for her. This woman, though unnamed in the scene, is clearly Amanda Waller, handler for the DC Universe's government branded, slightly villainous special ops team, the Suicide Squad. Rumors of a Suicide Squad game have been circulating, and this scene would certainly seem to confirm that something - be it a standalone game, DLC for Arkham Origins, or a presence in the next Arkham game - is in the works.