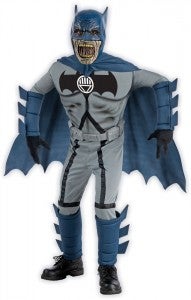 Talk about raising an idea from the dead.

Years after the completion of the miniseries, the Costume Craze blog is reporting that DC will roll out an official line of Blackest Night Halloween costumes. The site has Batman and The Flash already on display and while it's not completely impossible that this stil may turn out to be a late April Fools' joke, it seems unlikely as vendors on Amazon have started taking preorders for the Batman suit.

There's a zombie-fied Joker, as well, but that appears to be just something left over from the Batman: Arkham City collection and not actually a Blackest Night tie-in. It's not as though Joker was a zombie in Blackest Night, but would that really stop them from marketing such a popular image?

According to the site, the costumes will be available for pre-order soon, with stock expected for at least these two characters over the summer and there are "more zombie superheroes to come."

You think it's too late to lobby for an official Black Lantern Billy Mays costume?

Thanks to Super Podcasto Magnifico! for the link. While you're at the Costume Craze blog, check out the first official looks at Batman, Catwoman and Bane costumes from The Dark Knight Rises.