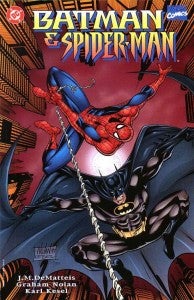 For a long time, Spider-Man has been considered the dominant solo superhero when it comes to comic book sales. Now according to some charts compiled by The Guardian based on Comichron data, it looks like Batman has overtaken Spider-Man in comic book sales.

What has accounted for the flip-flop? Well, The Guardian points to the possible effect of the popularity of the various movies. Christopher Nolan’s Dark Knight trilogy has dominated movie theaters over the last several years, which could be boosting Batman’s popularity. While Spider-Man has also had recent movies, his last two movies weren't as successful as Batman's last two movies. The Avengers sales seem to back up the movie effect, as Avengers comic book sales skyrocketed well above both Spider-Man and Batman when The Avengers movie was a big hit in 2012.