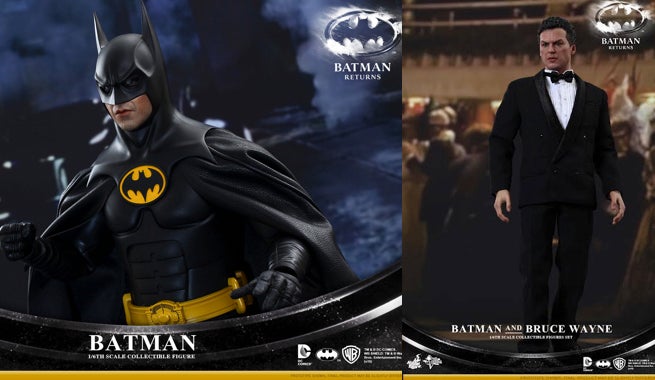 It's 1992 all over again, thanks to Hot Toys and their stunning new Batman Returns 1/6th scale Batman and Bruce Wayne figures.

Bringing Bird—we mean, Batman's Michael Keaton to stunning life in this highly detailed figure, the sculpt depicts the unique body armor and cowl featured in Tim Burton's second Gotham City adventure. This caped crusader clocks in at 32 cm tall with more than 30 points of articulation, oodles of interchangeable hands, and accessories including a batarang, a grapple gun, and two napalm packets (in case anyone tries to steal it from your shelf), and more.

What really really lights our bat-signal, however, are the head sculpts. Not only does the Batman figure feature rolling eyes to really nail Keaton's signature stare, but it also comes with an unmasked interchangeable head, recreating Returns' climactic scene where Batman tears his supposedly- armored cowl off like a piece of tissue paper.

But, if that's not enough Bruce Wayne for your buck, Hot Toys will also release a figure of Keaton's tortured playboy. Featuring Mr. Wayne in a sharp black suit and bow-tie, the figure will certainly give your shelf a dash of debonair.

The Batman Returns Batman and Bruce Wayne hit shelves between quarter three and four later this year. Unless, of course, you can find them an old video store first.