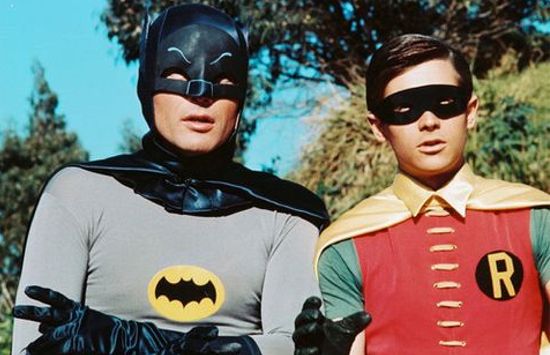 Earlier this year, it was announced that the Batman TV series, which ran from 1966 to 1968 on ABC, would be released later this year on DVD. In the initial announcement, not many details were revealed beyond that the home video release would include the entire series.

In an appearance at the Wizard World St. Louis Comic Con, Batman TV stars Adam West and Burt Ward revealed some additional details about the Batman TV series home video release, along with a release date for the collection.

“Finally, after an innumerable number of years, our series is going to be coming out, all 120 episodes,” said Ward. “I understand it’s right at the end of November this year in time for Christmas.”

Ward added, “I know this last week, both Adam and I at separate times, we went in and we filmed some additional bonus material for Warner Bros. that’s going to be included with the programs. And I also understand that they’ve really done a tremendous job digitally remastering our series so that it’s really going to be just absolutely gorgeous on DVD. So I think you can look forward to a very, very high class product.”

“Warner  Bros. had a very fine director/producer they hired,” said West. “And he asked us the most profound questions. And Burt agrees that he asked us things that people have never asked before. And it was tough to answer, but I think we were both very honest and straightforward and told him what he wanted to know.”

“And as a result you folks with the new DVD can see us naked,” joked West.

West added, “We answer questions and tell you things that we’ve never said before. They were so tricky.”