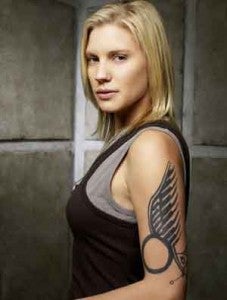 In her role as Starbuck(Kara Thrace) on the critically acclaimed TV series Battlestar Galactica , Katee Sackhoff rolled with what was written for her character with enthusiasm, be it the drinks, the fights or the dangerous missions she was given. Now, Sackhoff has a chance to write the destiny of a group of characters herself, as she recently announced her intentions to get her own comic book into the hands of readers. A partnership she undertook with a friend, Sackhoff's book, titled Versus, is set to premiere at San Diego Comic-Con 2010. She revealed a little about the roots of her interest in comics in an interview with TV Guide. In the interview, Sackhoff expressed a deep appreciation for the medium of comic books and for the talented individuals in the industry, "It really makes me excited. I’m a huge fan of Jeph Loeb (comic book writer). I’ve read all his work and I think he’s phenomenal. And I love all the Superman stuff he’s done.” Her own love of comics was formed early on, as she added, "I grew up reading Betty & Veronica. I was obsessed with it. Every time that we would go on an airplane or on a car trip I would go and get them and now I’ve become a fan of just the genre in general." No details are currently available about the content of the series, but more details will surely come as we inch closer and closer to 2010, and, certainly, Comic-Con!!