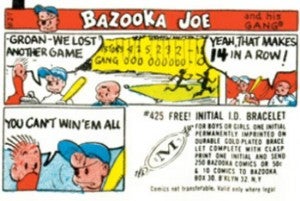 First Hostess Twinkies, now Bazooka Joe comics, what is the world coming to? At least in the case of Bazooka Joe, the company is still surviving, it's just the comics that wrap around the gum that are going away. In a day and age, when comic books themselves are undergoing a resurgence in popularity thanks to hit movies and TV shows, the same apparently doesn't apply to comics wrapped around gum. According to the a report in the New York Times, the whole gum market has dropped 38 percent over the last five years. Bazooka bubblegum fared even worse, reportedly dropping 48 percent during the same time period. Desperate times call for desperate measures, and in an effort to rebrand Bazooka bubblegum is dropping the Bazooka Joe comics. Instead, the comics will be replaced with games and puzzles. The change from comics to brainteasers will also include a packaging redesign. One of the executives from Bazooka Candy Brands calls the change a relaunch. In the comic book industry, relaunches have been very successful in generating buzz, so Bazooka might have been better served keeping the comics, but just relaunching the characters.