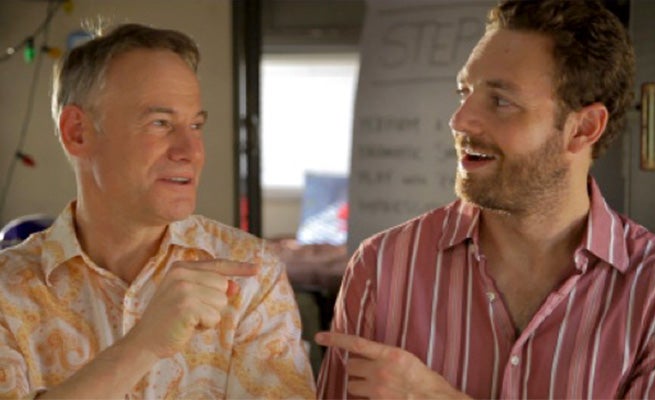 Last week, Pop TV premiered their latest series, Impress Me. The series follows a couple of professional impressionists, Jim Meskimen and Ross Marquand, who want to be dramatic actors but can't seem to be taken seriously.

Ben Shelton, who previously created The Daly Show, is the sole writer and director of each Impress Me episode. He won't boast and take all the credit, though. When I caught up with him to talk about the new series, Shelton quickly credited his "wonderful team" working alongside him.

Shelton and the team have a great time working on the scripted situational comedy which follows The Office's and Modern Family's mockumentary style. The pilot, which aired last Wednesday, found Ross and Jim struggling to decide whether or not they'll continue their impression work. Both aspire to be dramatic actors and feel as if they're cheapening themselves by simply getting laughs out of people by mocking celebrities.

There's a good bit of truth behind the plot. Shelton said that Meskimen and Marquand told him they would go on auditions but be asked to do an impression for the casting directors and decided, "This is a show. Your lives are a show!" He went on to say the show is, "grounded in the truth that is their actual life." It's quite ironic that Impress Me started when it did, because just three weeks earlier Marquand debuted in his role on AMC's The Walking Dead as Aaron, a prominent character from the show's comic book source material.

Shelton admits that Marquand's role on such an already popular series may help steer viewers to Impress Me, but said that ultimately, "everything helps." It's easy to tell that Shelton is passionate about his work. Before telling me that he would love to go on with a second  season (and more), he talked about the style of comedy he's going for. "We're less about jokes and more about situational comedy. My style of humor for this show is really mixing comedy and drama and letting the characters feel 100% real." If you watched the pilot, you know that Shelton's writing prowess easily set up the drama for the rest of the season in hilarious fashion when Ross is asked to do an impression of Christian Bale to speak with an unhappy director. I refuse to spoil how the scene goes because it is such unique comedy that is hard to come by.

If you missed the pilot last week, fear not. Pop TV airs several replays of the episode throughout the week, so run through your cable box's guide and set the DVR.

In the event that I haven't convinced you the show is worth watching yet, there's a little more to sweeten the pot. In addition to a Walking Dead star being part of the main cast, Impress Me will be loaded with cameos for the rest of the season. To name a couple, Matt Jones and Brandon Routh of Breaking Bad and Arrow, respectively, will be making appearances. According to Shelton, Routh plays, "the funniest cop [he has] ever seen."