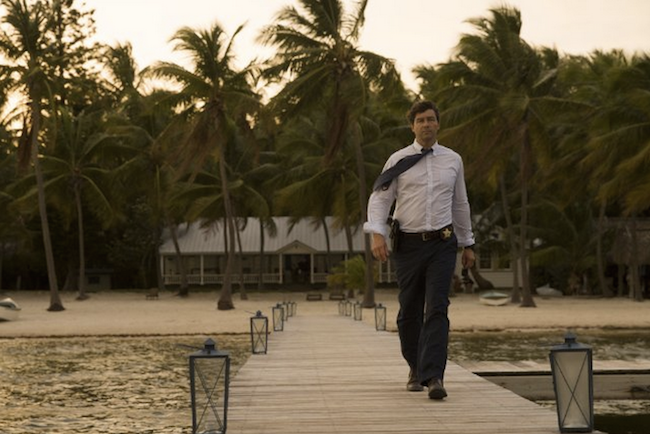 “Part 6” of Bloodline opens after John (Kyle Chandler) finishes reading the transcript of the interview between his younger self and Lenny about Danny’s “injury.” He calls Danny (Ben Mendelsohn) and asks if he would like to go fishing this weekend, but having just listened to the same interview himself via cassette tape with a mysterious woman in the car, Danny declines and hangs up the phone.

Sally (Sissy Spacek) reviews Robert’s will and testament back at the hotel the next day, and we see that Danny was officially taken out of it, with the other siblings splitting the estate. She later agrees to give Danny a few days off “to take a break” from working at the hotel. Danny hops in the truck and goes straight to Eric to pick up cocaine.

Kevin (Norbert Leo Butz) wakes up after spending the night with Belle, and as he’s leaving the house, snoops through her laptop. He finds her dating profile as well as an IM conversation between her and an upcoming date. Back at the shipyard, Kevin meets with Susie, who is selling a huge portion of the space where a yacht club to be built, which would likely destroy Kevin’s business. He offers to buy the space in cash, and she agrees.

John meets with Lenny (Frank Hoyt Taylor) later and asks what the statute of limitations is for making false statements to the police, which he did in the interview when he was younger. He asks Lenny what happened – from his side of the story. When Lenny heard that Sarah had drowned, he went to the hospital, where Robert and injured Danny were together. He made the mistake of asking what happened with both of them in the room, where Robert made up the car accident story.

The other young siblings all gave Lenny the same fabricated story, and he now regrets not pressing the issue further. He thought at the time that it was best to let them all grieve in peace. Lenny did approach Robert months later, but he denied the truth, which caused the dissolve in their friendship. Lenny feels like he failed Danny by not being there to protect him, and he admits that he gave a tape of the interview transcript to Danny.

John goes home to find Danny, when Sally tells him that Danny’s left town. He heads back to the office and makes some calls to see if anyone has seen Danny’s car. Marco (Enrique Murciano) dug up some info on a group of guys, currently behind bars, who he thinks might be related to the burned bodies case. John meets with a woman who spoke about the previous case, claiming the men threatened her and a group of women “with fire” when they were on a boat, by locking them in and torching the boat.

Meg (Linda Cardellini) meets with Carlos (Eliezer Castro), a cousin of one of the hotel employees, who needs a lawyer. He’s been charged with larceny, robbery, and aggravated assault. He blames the incident on alcoholism, and he’s since been in AA. Meg isn’t a criminal defense attorney but agrees to take the case.

After meeting with the prosecution to discuss Carlos’s case, she accidentally runs into Alec. She apologizes for her possibly overreacting on the phone, but does say that their fling is over now.

Danny heads to multiple bars after snorting some of the cocaine, drinking mostly tequila. He makes eye contact with a woman dancing in the crowd, who walks over and whispers in his ear. Danny and the woman go into a bathroom stall to do more coke, with her one of her male friends. The three of them dance and grind until Danny runs out of cocaine – when they leave. 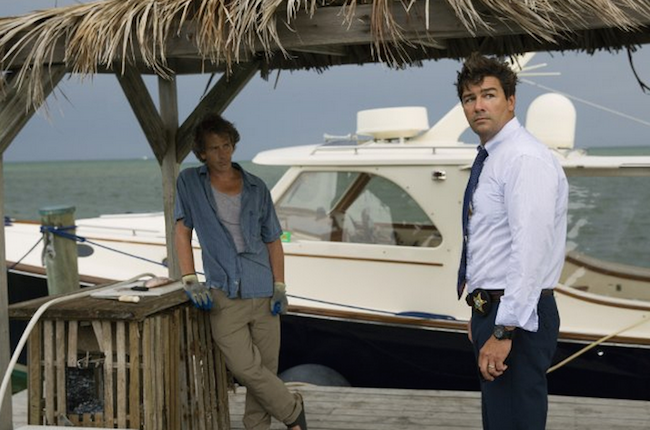 Then, Danny goes back to a quieter bar, where he starts mocking a huge guy in a Navy t-shirt for ordering a girly drink, until he starts beating on Danny, who offers no physical response but keeps up the insults. Chelsea finds Danny and tries to take him home, but he refuses and says that she means “less than nothing” to him. He stumbles onward until getting into an SUV with a total stranger.

Kevin is shown at the restaurant where Belle has her date, watching from afar for a few minutes before leaving. He comes back to the hotel, where he, John, and Meg discuss the will. John says that if they want to cut Danny out, they’ll have to cut him out too. Kevin goes back to Belle’s house to give him his keys, saying they’re hers now. He adds that he loves her and always will.

The police find Danny’s empty truck and call John down to the scene. John finds Danny’s abandoned phone on the seat, as well as the cassette still in the player. Meanwhile, Danny is back at the stranger’s party, smoking crystal. John and other members of the sheriff’s department shut down the party, and John pulls Danny aside.

Danny thinks that John is here to protect the family image, as he always has done. John explains that when he and the others lied as a child, they weren’t protecting Robert. They were protecting Danny, because if they didn’t help the whole thing blow over, the police might’ve investigated further into Sarah’s death. Danny insists that her death was a total accident, but John says he’s still to blame.

John tries to cuff Danny, resulting in a struggle that ends with Danny pointing John’s gun at him. The woman who was in the car with Danny at the episode’s opening appears behind him. John asks who it is, and Danny says she’s been with him “the whole time.” The woman tells Danny that it’s “time to decide,” asking, “is it you, or is it them?” Danny points the gun to his own head for a moment, then back to John, and then back to himself – shooting.

Suddenly, the episode cuts back to Danny sitting at the party. The previous scene was all in his mind.

Meg gets lunch with Marco the next day. She tells him that she’s ready for him to propose, but he still doesn’t thinks he is ready. Around the same time, Kevin sees Chelsea at a local bar. He jokes with her about how cheap it is to get a divorce online, they start chatting, and he buys her a drink.

Danny somehow makes it home in the morning before getting back to work at the hotel. John asks him about his truck, which was out of gas when they found it. John thinks that they should have a talk, both knowing that they’ve both recently heard/read the interview. He apologizes for what he did when he was younger, admitting that he was wrong. They were all wrong.

John wants them to start their relationship all over again, now that their father is gone. Danny proposes they go fishing.