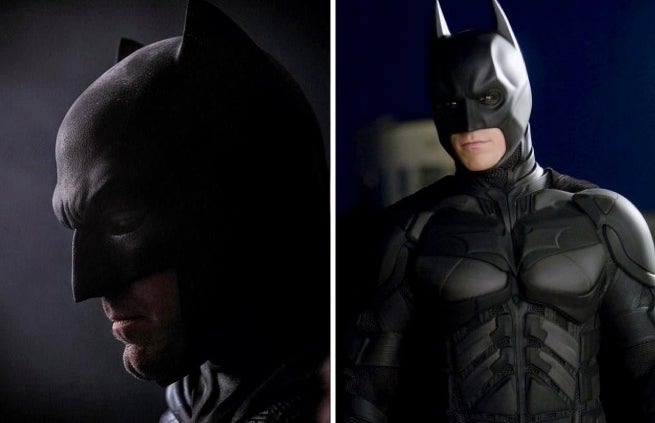 As Ben Affleck inherits the mantle of the Bat for Batman V. Superman: Dawn of Justice, his predecessor has offered some sound words of wisdom.

Christian Bale, who played Batman in Christopher Nolan’s Dark Knight trilogy, recently parted the best advice he could to Batfleck via The New York Daily News. And it wasn’t on any techniques for scaring the superstitious and cowardly, or talking like there's a box of baking soda in your throat. No, the best thing Affleck can do as Batman, according to Bale, is to take a pee break before fighting crime.

"Be able to take a piss by yourself," Bale revealed. “I found it to be ridiculously unheroic between takes when I said, ‘Excuse me, I need to pee, could somebody undo me please?’"

Bale also recommended that Affleck gets a Bat-Cowl that doesn’t make his head feel like it’s inside of a pressure cooker. This has actually been a problem for every Batman actor since Michael Keaton. Almost all of the live-action Batman cowls have been attached to neck pieces, making it impossible for the actor to freely move his head and neck. Though this issue was addressed in 2008’s The Dark Knight with a detachable mask fashioned after a motorcycle helmet, it looks like Ben Affleck’s Batsuit is going back to the old (and uncomfortable) way of business.

“I took three people 20 minutes with tools in order to take that cowl off (my) head,” Bale said.

And while a new generation will grow up with Affleck as their primary image of Batman, Bale seems to be fine with moving away from the spotlight—just like The Dark Knight.

“The baton has been passed, that’s the nature of Batman,” Bale concluded. “Of course, it was passed a lot quicker than I expected, but I completely understand.”