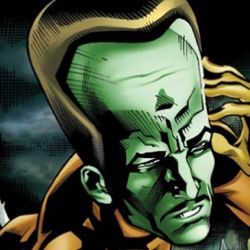 There are predominantly two types of comic book characters with big heads: super-villains and children. Superheroes do not have big heads as a general rule, except in special issues where some diabolical menace temporarily turns their head big. The fact that virtually all big headed adults in comic books turn out to be super-villains isn’t a good sign for the likes of Richie Rich, Charlie Brown, and Casper the Friendly Ghost. Just think of the criminal empire that Richie Rich could establish with all his wealth. But somehow, I just can’t see a middle-aged Charlie Brown knocking over a bank or old man Casper terrorizing a family. Here is our list of notable big headed comic book characters. The Leader The Leader is one of the most famous of all the big headed super-villains. The Leader was created by Stan Lee and Steve Ditko over forty-four years ago. The Leader doesn’t just have a big head, but he also has a super-sized brain, which makes him super intelligent. The Leader has been an ongoing nemesis for the Hulk in a battle of high IQ versus brute strength. If another Hulk movie gets made, then it’s likely that The Leader will be the villain in the film.

MODOK MODOK stands for Mobile Organism Designed Only For Killing. Now, that we have that out of the way, MODOK was an average technician named George Tarleton until he was turned into a bi-engineered living computer. MODOK possesses superhuman intelligence and extraordinary psionic powers. MODOK is confined to a hover chair that transports his gigantic head and small, deformed body. MODOK is also quite mad, which seems to be a re-occurring theme among people with giant heads.

Brainwave Brainwave was an old school super-villain. His first appearance was way back in 1943, and he was originally a nemesis of the Justice Society of America. Unlike many other big headed super-villains, Brainwave was not the result of some experiment gone horrible wrong. Brainwave was born as a meta-human with vast mental abilities. In addition to his genius intellect, his powers included telepathy, telekinesis, image projection, and psi-blasts. Brainwave has a son named Brainwave, Jr., who inherited his powers but not his huge head, thankfully.

Hector Hammond Hector Hammond was just a petty criminal, when he discovered fragments from a meteor in the woods. In a comic book, anytime someone encounters radiation from a meteor, they are going to wind up with some type of super power. Hammond wound up with an enormous brain, psionic powers, and immortality (not too shabby). He uses his powers to give Green Lantern grief.

Richie Rich Richie Rich is the world’s richest kid. Supposedly, he’s very kind and charitable, but we know behind that big heard of his there is a super-villain just waiting to break out. It’s only a matter of time before Richie Rich uses his money to build some type of laser beam machine or something that makes his already big head grow to gigantic proportions. He’ll then use his evil genius to get even more money, because there’s never enough money for the world’s richest kid.

Casper Casper is supposedly a friendly ghost, but with his huge head, we know once he grows up that he’s going to be up to no good. Just imagine, a ghost with high intelligence and psionic powers, he could be the greatest supervillain in the world.

The Mekon Big heads aren’t a phenomenon regulated to comic book characters in the United States only. The Mekon is the arch enemy of the British comic book hero Dan Dare. The Mekon’s nickname is “Melonhead,” and he was created as the result of a scientific experiment to create very high intelligence. It’s good to know that even across the ocean that big heads equal high IQs and evil.

The Watcher What a big-headed adult who is not a supervillain? Of course, he’s not exactly a superhero either. The Watcher does just that, he watches. The Watcher is a member of extraterrestrial species that observes and monitors the activities of other species. Uatu is the watcher, who has the great fortune to observe the earth and its solar systems.

Egg Fu It’s debatable whether Egg Fu belongs on this list. He isn’t so much a big head as a giant egg. There have been multiple incarnations of Egg Fu. The latest Egg Fu also goes by the name Chang Tzu and gets around in a spider-legged chair.

The Gargoyle & The Gremlin Proving that sometimes a big head can run in the family, the Gargoyle and the Gremlin are father and son. The Gargoyle was involved in a radiation accident that altered his face and body and left him with a big head and high intelligence. Unlike with Brainwave, the Gargoyle not only passed on his high IQ but also his big head to his son, the Gremlin. So are there any other notable big headed comic book characters that we forgot and left off the list? Add your lists of big headed comic book characters in the comments below.