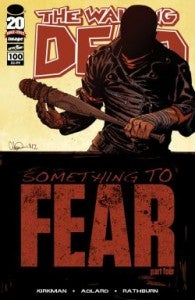 Well kids, we are just HOURS away from Comic-Con 2012 and comicbook.com's first ever live coverage of the event!  Before I pack my bags and join fellow site writer Russ for our coverage of the convention and all its nerdy goodness, it's time for my weekly hot list!  Let's take a look at the books that are generating all the buzz this week, the ones that you're going to want to pick up first thing tomorrow!  Image Comics tops our list this week with quite a milestone issue of one of the most popular titles in all of comics, The Walking Dead

The Walking Dead #100  This is it!  See what drama and terror unfolds in this big issue for the Robert Kirkman series! This may be hard to believe, but this issue has one of THE most gruesome and shocking incidents in the history of the series!

Peter Panzerfaust #5  The conclusion to the story "The Great Escape" happens here, and the Lost Boys make their last stand as Paris falls.

Dancer #3  Snipers are around, and Alan has to play this one very carefully, or a certain ballerina will wind up dead.

Youngblood #72  Die Hard is getting some special recognition from the military, just in time, because the dead are rising in this issue!

Batman #11  After the stunning events and revelations of Batman #10 where do we go from here?  Find out what Scott Snyder has in store!

Batgirl #11  Batgirl faces off against one of her newest villains in Knightfall, but she'll have her hands full with more than just her!

Resurrection Man #11  The penultimate chapter to the story of just what WILL happen to Mitch Shelley!

Superboy #11  The Teen Titans guest star, as Superboy now tries to learn to live without the influence of N.O.W.H.E.R.E.

Deathstroke #11  It's quite the battle in this book, as Lobo takes on Deathstroke, the Omegas and Zealot!  They'll talk it out, right?

Legion Lost #11  The future, literally, is at stake, all because of what's happening in the present.  Metamerican continues the battle with the team as well.

Avengers vs. X-Men: Versus #4  Psylocke takes on Daredevil, and Emma Frost tries her diamond hand against Iron Man!

Captain America #14  Finding out the new Scourge's identity has thrown Cap for a loop.  How will this play out?

Fantastic Four Annual #33 Human Torch and the Thing go out with Doctor Strange to investigate a mystical paradox, and ClanDestine returns!

New Avengers #28  Prison break time!  Can the Avengers free their comrades from the X-Men's jail?

New Mutants #45  It's the return of Karma and Cannonball here, but they're older and wearing suits from Warlock tech?

Spider-Men #3  The partnership between the Ultimate and the 616 Spider-Men continue, as Mysterio is in their sights!

Buffy the Vampire Slayer Season 9 #11  Kennedy returns this week, and just what Buffy ordered, as this whole no slaying thing may not work.

Eerie Comics #1  Can't get enough of Creepy here at Dark Horse?  Then meet its sci-fi and horror cousin, Eerie!

Conan the Barbarian #6  "The Argos Deception" continues here, with a pirate queen about to step in more than she can handle.

The Massive #2  This new title from Brian Wood continues its mystery here, as a social sci-fi story and an underwater Hong Kong keeps unfolding.

Bloodshot #1  The return of one of Valiant's most beloved and clamored for titles returns tomorrow!

Harbinger #2  Ready for the next chapter of this major title's relaunch?  Hold on, and pick it up!