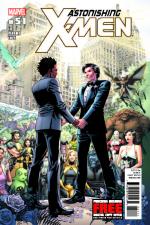 The summer is upon us, and summer events from all major publishers are underway.  June is also a time for love, and hey, I'm a romantic at heart!  June is a big wedding month, and so it's no coincidence then that tomorrow Marvel has one of the more attention-grabbing issues of the year!  Let's go ahead and dive into this week's hot list. Marvel Astonishing X-Men #51  It's here!  The wedding of Northstar and his boyfriend Kyle is in this issue!  Don't miss one of the more high-profile comic events of the year. Avengers vs X-Men #6  The events of the previous shocking issue have unfolded, and now it's time to see how the Phoenix and its avatars will continue. Dark Avengers #176  Goodbye Thunderbolts, hello Dark Avengers.  The series officially takes a turn here! Uncanny X-Men #14  Hope is in danger, and at last Mr. Sinister's plot begins to unfold.  Follow more of the A vs. X story here! Winter Soldier #7  A rogue Soviet sleeper agent is on the run, and Bucky must rely on Black Widow to help with an international incident. New Mutants #44  The Defenders guest star in this issue, but just why are they here? Journey Into Mystery #640  It's an Arthurian legend free for all, with Merlyn, Arthur, and the Round Table.  Captain Britain and Loki are a key part of this package as well!! Daredevil #14  One of the best books you may not be reading is back, and Daredevil is trapped in that happening tourist spot, Latveria! DC Comics Wonder Woman #10  Speaking of wedding bells, Wonder Woman is in Hades for a lovely ceremony to the god of the dead.  I have a feeling some WILL be speaking up in objection. Nightwing #10  A new arc begins here, and a double murder in Old Gotham is the scene, but a piece of Nightwing's costume is a key component! Catwoman #10  In another part of Gotham, Catwoman takes on a new villain in Dollhouse, who has an affinity for kidnapping children. Captain Atom #10  The mystery of Chrona Mota is here, and just how will Captain Atom survive a trip through time?  The final issues are here! Blue Beetle #10  Mister Bones makes an appearance here, and Jaime's single guy in New York life may not be working out. Legion of Super Heroes #10  Brainiac 5 is in danger, and it's up to Star Boy and a small group to bring him back in one piece Batwoman #10  Batwoman is on a collision course with one of the most savage and dangerous villains in Gotham, Killer Croc!! Before Watchmen: The Comedian #1  One of the more striking figures of the Watchmen gets his inaugural issue here! Image Comics The Walking Dead #99  It's coming, and I know you're ready for that big 100th issue, but do NOT miss this one first! Glory #27  Part two of the current arc "Destroyer" is here, and Glory's home is under attack. Chew #27  Yes, you've already seen this issue, as it came out several months ago.  However, now you'll actually understand what's happening! Elephantmen #40  It's Panya, the Silencer, Destiny's father and mayhem and revenge will ensue! Dark Horse BPRD: Hell on Earth: The Devil's Engine #2  All that title buildup is worth it, I promise!  It has bat-faced monsters attacking Texas after all! Dark Horse Presents #13  Your monthly oversized and creatively loaded series is back! Alabaster: Wolves #3  Dancy's two guides aren't exactly the most trustworthy, but will they help her as she continues her journey? Star Wars: Darth Vader and the Ghost Prison #2  Vader's past comes to get him this issue, as he and Tohm explore an abandoned Jedi temple. Star Wars: Dawn of the Jedi-Force Storm #5  Hey, it's a twofer week where Star Wars is concerned!! Boom! Adventure Time #5  The cult cartoon hit continues its monthly adventures in the hilarious Boom title Planet of the Apes #15  Enemies will work together in this issue, as Alaya must team with someone who wants her dead. Higher Earth #2  With so many Earths to run to, how can two people not hide?  You'd be surprised, so check out this compelling new series!