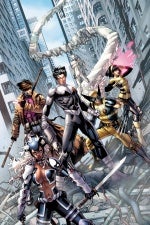 Well boys and girls of all ages an comic book interests, the time has come once again for this week's edition of which books will be hitting comic book store shelves this Wednesday.  We're in a pretty exciting time of year for comics, as many summer events are already either underway or soon beginning!  X-Men fighting Avengers, The Court of Owl battling Gotham's best warriors, issue number 100 of The Walking Dead and so much more!!  Let's not waste any more time, shall we?

Astonishing X-Men #50  Yes, I know you have probably already heard, but check it out anyway, what will a little romance hurt?

Amazing Spider-Man #686  Nothing could be more unromantic that Spidey smacking down the likes of Doctor Octopus, but man is it fun!

Fantastic Four #606  Black Panther is back once more in the pages of this book, as the team travels to Wakanda

Hulk #52  Could the Legion of Monsters be the thing that helps save everyone in this book?

Captain America and ... #631  Hey it's Hawkeye!  And hey, there are crazy dinosaur children out to kill him! What?

Powers #10  Want a sneak peek at the Bendis and Bagley co-created comic?  Buy this issue, and for the awesomeness as well

Ultimate Comics X-Men #12  See, I COULD tell you which villain returns in this issue, but where would be the fun in that?

Batman, Incorporated #1  Another one of the new titles as the second wave of the new 52 rolls out this week, with, of course, everyone's favorite Bat!

Aquaman #9  The mystery and the menace of Aquaman's arch nemesis Black Manta continues to unfold here.

Teen Titans #9  The finale of the "Culling" story arc ends here.  Who will remain standing in this teen battle royale?

The Fury of Firestorm #9  Firestorm comes into direct contact with the Justice League International here, in no other place than Paris!

Justice League Dark #9  A new team is unveiled here, and just in time, as Felix Faust is on a collision course with the team

I, Vampire #9  Andrew Bennet shall lead them?  The aftermath of "Rise of the Vampires" begins here with a new direction

Batman: The Dark Knight #9  All Red Robin wanted to do was come back to Gotham and say hi and he ends up battling the Court of Owls, sheesh!

Elephantmen #39  It's the end of the current arc, "The Killing Season", and it comes to a very bitter end

Chew #26  Space Cakes begins here, and if you thought things couldn't get any stranger, well, read on!

Near Death #8  What's a little blood feud that's been going on for decades and someone getting caught in the middle?

Youngblood #71  Celebrate the 20th anniversary of this team that helped to put Image on the map!

Star Wars: Darth Vader and the Ghost Prison #1  You mean the title alone didn't grab you??  It's VADER!!!

Orchid #7  Orchid managed to escape Tomo Wolfe, but what obstacles await her now with hope resting on her shoulders?

Dark Horse Presents #12  It's a mix of Nexus, Aliens and Mister X in this always entertaining collection

Resident Alien #1  What's a stranded and disguised alien hiding out in a small American town to do til he's rescued? Pose as a doctor!

Elric: The Balance Lost #10  The final arc is here, and all four incarnations of the Eternal Champion prepare for battle!

Hellraiser #14  A new Pinhead is in town, and not everyone is welcoming the change with open arms.

Irredeemable #37  DO NOT MISS THE FINAL ISSUE OF THIS SERIES!!!