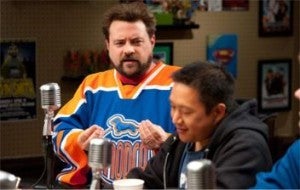 In "The Sidewalk Stash" episode of Comic Book Men, Ming takes part in a town sidewalk sale. To kick things off, the Secret Stash staff play a game of Price Guide Bingo, where they try to guess the value of various comic books. Then, the customer, who on a past show brought in the comics that smelled like cigars, returns with a new item. The customer has a full display box of Superman Kryptonite Rocks, which originally came out in 1977. Pop culture expert Rob Bruce gives a value of maybe $400 on the lot. However, Walt really wants the case, and he offers to go $500. After some negotiation, the customer and Walt agree on a price of $600. After the customer leaves, Ming is doing inventory in the basement. Ming comes up with an idea to participate in a town sidewalk sale to try to move some inventory. Another customer comes in looking for Teenage Mutant Ninja Turtles #1. Kevin Smith provides a history lesson on how Teenage Mutant Ninja Turtles originally started. Walt has a third printing of the first issue of Teenage Mutant Ninja Turtles available for $85. However, Walt recommends that a better investment would be first prints of issues two, three and four. When the customer becomes interested, Walt cuts him a deal for $150 for all three first prints. Ming sets up tables outside on the sidewalk, promoting comic books for $2.99 a pound. A customer comes into the Secret Stash to sell a copy of Superman Vs. Muhammad Ali. After flipping through the issue to point out the celebrities inside, Walt negotiates with the customer to reach a buying price of $40. Outside, Ming is struggling to move inventory during the sidewalk sale, so he comes up with an idea to create a wheel of comics. Ming's idea works, and customers start spinning the wheel to win free comics or discounts. A customer comes in trying to sell the original Star Wars trilogy on laser disc. Walt challenges the customer to answer trivia questions to determine if he will pay the customer's price or if the customer will have to take Walt's price. The first trivia question is what TIE Figher stands for, but the customer gets the answer wrong. The correct answer is Twin Ion Engines. Walt buys one of the laser discs for $5, but he gives the customer a second chance question on the other two lasers discs, and the customer gets the answer right this time. Ming returns from the sidewalk sale, having sold $70 worth of merchandise. Walt points out that Ming sat out there for 7 hours, which means he made $10 an hour and didn't even cover his salary. However, Walt said all kidding aside that Ming sold a lot of stuff they didn't need, and he shook Ming's hand for doing a good job.