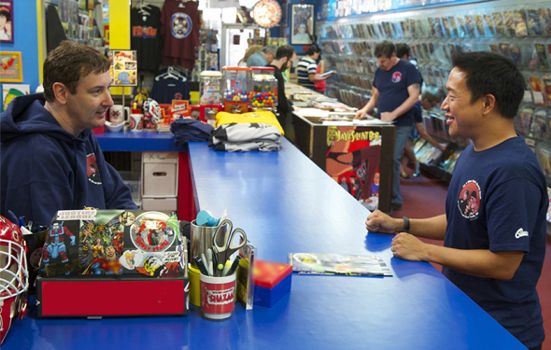 The “USS Ming” episode of Comic Book Men kicks off with the Secret Stash guys talking about comic book gadgets that they would like to see in real life. Walt says he thinks it won’t be long before there are real Batbelts, and Ming says he would like to have Wonder Woman’s lasso of truth.

A doctor brings a G.I. Joe Terror Drome into the Secret Stash, and Ming is immediately infatuated with the toy. Ming relays a story about how he dug a G.I. Joe Terror Drome out of his neighbor’s garbage, but then his neighbor saw it and wanted it back. The doctor reveals he wants to sell the toy to get money to publish a set of illustrated flash cards that teach doctors about toxicology.

Batman writer Scott Snyder is the special guest on Comic Book Men, and Snyder explains his Court of Owls storyline. Snyder also reveals that the Batman D-list villain that he would like to re-imagine is Crazy Quilt.

A seller brings a copy of Heroes, the Marvel 9/11 tribute comic, into the Secret Stash. The Heroes comic is signed by a number of creators involved with the book. The seller reveals he’s going to donate any money he gets from the book to charity. The seller asks for $100, and Walt agrees to buy the book for $100, since the seller is going to donate the money. After Bryan razzes Walt for only giving the seller $100, Walt says he’s going to give him $150 instead.

A seller brings in a JLA United Lithograph to the Secret Stash. The seller reveals that he was to sell the art to buy Donnie & Marie tickets for his wife. The seller asks $700 for the lithograph, but Ming says it’s only worth around $300. After some negotiation, the seller agrees to part with the piece for $340.