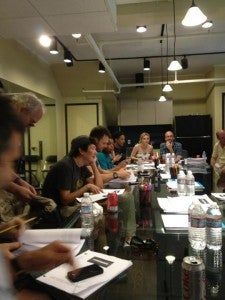 has returned to production, as evidenced by new photos of season four's first table read that have appeared on the show's Facebook page. Series stars Joel McHale, Ken Jeong, Chevy Chase, Yvette Nicole Brown, Alison Brie, Danny Pudy, Jim Rash and Gillian Jacobs all appear in the new photos, along with unidentified men on the periphery of the shots that are likely producers, writers or guest stars. Defying the odds, NBC's cult-favorite sitcom was renewed at the end of last season for a fourth (and possibly final) season. The thirteen episode order, which could be expanded if the network is pleased with its performance, begins airing on October 19 under new showrunners David Guarascio and Moses Port. "I know the guys," series star Joel McHale said of the new showrunners in an interview with NBC's Philadelphia affiliate in support of this week's upcoming home video release for the show's third season. "I did a pilot with them, and they're great guys, so I knew that they were funny and in that sense I wasn't worried about it. I knew that these guys could deliver, and a lot of the same writers came back. So in that sense I was confident with the writers, definitely, and then it just kind of came down to what the table read was going to be like. It went really well, and so that was really great."

The decision to replace the series' creator, Dan Harmon, has been a controversial one among fans, with many of the show's staunch supporters (who have consistently led it to victories in basically every online contest it's entered in) debating whether to stick with the embattled series or not as it goes into its first season without Harmon. Check out the Community panel from this year's San Diego Comic-Con International, embedded below.