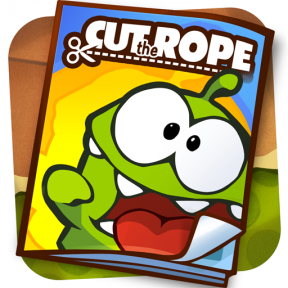 Taking a page from 'Angry Birds', the founders of the 'Cut the Rope' mobile game have expanded their brand.  ZeptoLab, in conjunction with Ape Entertainment, have released the first three issues of a 'Cut the Rope' comic book.

The series takes an interesting approach by filling in the backstory behind the game, starting with thirteen-year old Evan Coulton finding a very plain box on his doorstep.  He discovers the star of 'Cut the Rope,' the green monster Om Nom.  The comic book series takes readers through the adventures of Evan and Om Nom.

“With millions of fans around the world playing Cut the Rope, the new comic series provides the first glimpse into the story of Om Nom,” said Semyon Voinov co-founder, ZeptoLab.  David Hedgecock, CEO of Ape Entertainment, agrees: "The Cut the Rope digital comic series is much more than a pages to pixels app – it’s an experience that taps into the power of iOS and unleashes the world of Om Nom to fans across the globe. "We believe this is the exact direction that will satiate comic book fans' appetite in the digital age, as well as offer a reason to continue coming back to the App Store and local comic shops."

ZeptoLab plans on expanding the 'Cut the Rope' brand, as they're releasing multiple lines of licensed goods, including apparel, plush toys and other accessories.  You can pick up the first episode of the series on the iTunes App store.  The next two issues are $1.99 each.  Editions are available for the iPhone, iPad, as well as the iPod Touch.