So by now, our readers probably know that Marvel and Netflix kicked off a deal today that's aimed at putting five season-long miniseries events on the popular streaming service between 2015 and an indeterminate end date; four series will build up individual heroes, with the fifth establishing them as a team.

Kind of like the whole Iron Man, Captain America, Thor, Hulk, Avengers philosophy...except on TV, and with "street-level" heroes who will end up calling themselves The Defenders.

TV's Defenders won't be any of the Defenders teams we've seen in the comics, though; this time around, we're looking at Daredevil, Luke Cage, Iron Fist and Jessica Jones (plus whatever hangers-on they end up inevitably bringing along, like Iron Man did with Black Widow and Hawkeye).

These characters aren't quite the same level of awareness that Captain America and company have and, in many cases, this is their first time in a live-action adaptation. So we've been thinking about what we'd like to see from them...

...but our first stop is Daredevil. He's a character who's already had a big-screen adaptation (which is remembered as a huge failure, but in actuality made enough money that Fox went through with a spinoff--and he's also the longest-running and most widely-known character on the roster, affording his series a certain level of increased expectations from casual viewers.

So...what would we like to see in a Daredevil TV series? 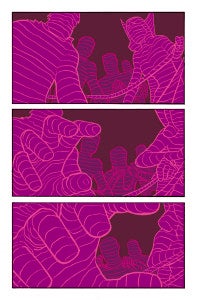 Cool use of his blindness

It's incredibly difficult to find a cool and creative way to use Matt Murdock's blindness on film, but it's key to his character and the source of his apparent powers, so it has to work.

Having a Daredevil series that doesn't have some kind of cool visual trick to deal with his blindness would be like if Arrow decided "you know what? Bows and arrows are stupid." You just become a poor man's Batman.

This is the kind of thing that's undervalued in TV and film in general, but in a show where the lead character has enhanced hearing, you have to make sure to raise that game.

Agents of S.H.I.E.L.D.'s music is done by the same composer who does The Walking Dead, and yet somehow it feels very sterile and boring by comparison to the understated and beautiful way McCreary handles AMC's zombie drama.

Even if it isn't just scoring, your effects sounds have to be perfect, your mixing has to be perfect, and a kick-ass soundtrack couldn't hurt, either. A character whose hearing is near-superhuman would likely have a keen interest in music, so it could be a fun thing to play with. Just think of John Cusack movies; they almost always incorporate Springsteen, The Clash and other musicians Cusack himself likes, and it helps to personalize his character and gives a kind of shorthand to his personality. 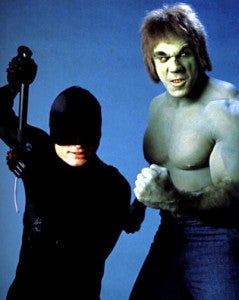 This is a kind of obvious one, considering you should never make a character based on a storied character with a rabid fan base without casting a strong lead actor--but it cannot be overstated enough, considering that Ben Affleck is still stung to this day with "Daredevil" jokes. If the casting isn't perfect, there's inevitably going to be a kind of shorthand for how not to handle comic book casting--and that shorthand will be "Daredevil."

Of course, as you can see at right, a good look doesn't hurt any either.

More than any of the rest of the Defenders, Daredevil has a long history with a strong supporting cast who aren't just superheroes. So far, Marvel has been pretty light on non-superhero friends and family (in fact, pretty much just girlfriends have been present so far)...so it would be a great change of pace, on a more "street-level" super-show that has presumably close to 8 hours of actual runtime to deal with, to get something in the way of characterization and a sense that Matt Murdock has a life outside of wearing tights and beating up on guys.

Organic ties to the rest of The Defenders

Again, this one will be important in building to The Defenders as a series, but in this case, it's probably most important. We're going to go ahead and assume that Daredevil, as the most visible and well-known character of the batch, will be one of, if not the, first and almost certainly key to the development of the Hell's Kitchen corner of the Marvel Cinematic Universe.

As such, he's our pick for the group's Nick Fury--although it could be Luke Cage, we suppose, since he's got the Hero-For-Hire gig going...but we digress. In any event, people will be watching the Daredevil series closely for a look at the tone and look of Hell's Kitchen, and in addition to the setting itself, it's important this series set the precedent for characterization and how they bring the team together.