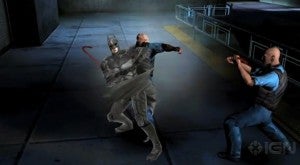 Gameloft and DC Entertainment have made a new trailer available for what's being called an "open-world Dark Knight Rises mobile game," available on the Apple App Store and Google Play soon. In the game, available below thanks to an embed from IGN, users can play as Batman, who is the city's last hope "when Gotham is threatened and people live in fear." It's a pretty standard iPhone game, as far as it looks, with decent graphics but pretty limited gameplay. There's no firm release date for The Dark Knight Rises: The Mobie Game yet, with the trailer saying only "Summer 2012." One assumes it will hit around the same time as the film, particularly if there are any in-story similarities that might blow the guarded plot of the film.