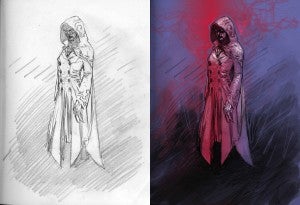 There have been two mysterious women to cause a bit of a stir with their cryptic appearances in DC's The New 52 initiative: One of them has been appearing intermittently on Justice League International covers, and the other...well, she's been just about everywhere. Appearing first at the end of Flashpoint, this mysterious, hooded woman presents herself as a guiding hand who merges the disparate universes of the DCU, WildStorm and Vertigo superheroes to "strengthen" the world against "their" arrival. Who are "they?" Well, that's very hard to say, I suppose (and the fodder for an upcoming story in itself), but after appearing in the background of all 52 new #1 issues in September, the hooded woman has finally been addressed officially by DC for the first time on this morning's blog. Many fans have speculated that this character may be a reimagining of either The Monitor or Harbinger, two of the characters who monitored the universe of matter and worked to help the DC heroes against the Anti-Monitor in the classic (and no-longer-canonical) Crisis on Infinite Earths. That might fit the general job description the character seems to have ascribed herself, but would almost necessarily create an "event" comic the likes of which DC co-publisher Dan DiDio and many others at the company have said they plan to avoid for the first year or two of the New 52. Bob Harras, DC's Editor-In-Chief, posted about the character on The Source. "You'll soon see the next step in this character's evolution in the pages of Justice League," Harras said. "And in the months to come you will see more events ripple across titles as we continue to weave the DC Universe together...." And how does that work, with a "no events" rule? Only time will tell, but with this character having a major, linewide story in Geoff Johns's Justice League while Grant Morrison continues to pound away at Multiversity and rumors persist about a Watchmen follow-up, it's probably safe to say that there aren't many people getting a whole lot of sleep around the DC offices these days.