DC Comics has made a three-page preview of Wednesday's Action Comics #4 back-up story, featuring Steel and written by Sholly Fisch with art by Brad Walker. The pages are below (click to enlarge), along with DC's description of the story.

One of the most prominent and popular African-American super heroes, STEEL will be making his debut into the world of DC COMICS-THE NEW 52 on December 7.

Equal parts Superman and folk legend John Henry (to whom the name of his alter ego, John Henry Irons, is an homage), Steel will appear in ACTION COMICS #4 – written by critically acclaimed, bestselling author Grant Morrison and illustrated by Rags Morales.

When Terminauts threaten to lay waste to Metropolis in search of Superman, it falls to Steel to come to the aid of the beleaguered hero – and the Man of Steel will sure need the help of this steel-drivin’ man. But their team-up isn’t all we’ll get from Steel in this issue. ACTION COMICS #4 also features a special backup story written by Sholly Fisch and drawn by Brad Walker. The eight-page story continues the action of ACTION, showcasing a heavy metal battle between Steel and Metal-zero. 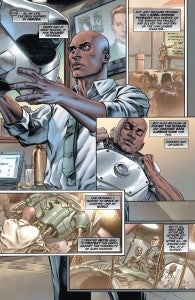 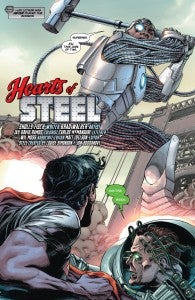 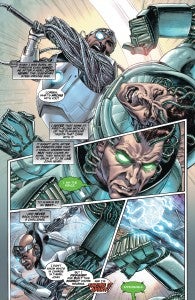