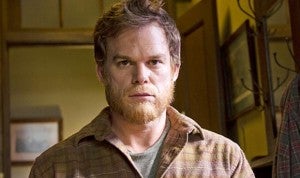 Warning: Spoilers ahead for the Dexter series finale.

When Showtime's hit crime drama Dexter, based on the series of novels by Jeff Lindsay, recently ended, there was a lot of discussion about whether the finale was a fitting end to the series. Specifically, a subset of the fandom believed that the character needed to die at the end of the series, either to give the story a definitive ending, to "pay for his crimes" or something else. It wasn't to be, though, and now one of the series' producers are laying the blame for that decision at the feet of the network. "They won't let us kill him," Dexter producer John Goldwyn told Vulture. "Showtime was very clear about that. When we told them the arc for the last season, they just said, 'Just to be clear, he's going to live.' There were a lot of endings discussed because it was a very interesting problem to solve, to bring it to a close. People have a relationship with Dexter, even if it doesn't have the size and ferocity of the fan base for Breaking Bad. But it has a very core loyal following." Breaking Bad, of course, had a finale within the same week as Dexter's--and drew largely positive marks from audiences and critics who found the finale fulfilling. Dexter, meanwhile, had been drawing abuse from viewers and the press all season long, and as the finale neared and it became evident to many that they weren't going to get an ending they wanted, a number of articles started to come out comparing the final seasons of the two dramas. In such discussions, Dexter never came out on top. Why would Showtime step in to ensure the health and safety of Dexter? It's difficult to say, although it could be a contractual stipulation with Lindsay, who is still writing novels and comic books based on the character. Certainly given the visibility of the TV series as compared to the other media, it could be that killing the character in the finale would have confused consumers about the books and comics.