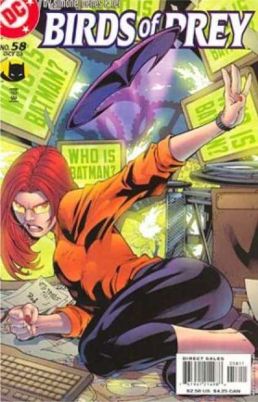 As we pass through the ides of March into another week here at Comicbook.com, it's time once again to take a short trip into the comic book universe to see what starts or black holes may exist in the galaxy of your local comic shop's dollar bin. This week's entry comes to us from DC Comics, and from a group of recently disbanded female superheroes. Let's revisit the long-running and much-celebrated Gail Simone era from Birds of Prey with this week's Dollar Bin Discovery.

Summary: The story opens with Black Canary in the middle of a trap, reminiscent of the ones from Batman the TV series. Handcuffed, arms behind her, legs encased in metal sleeves, she is the prisoner of Savant, a brilliant criminal who had aspirations of becoming an equal to Batman, as shown in a nifty flashback, but who focused on catching the arsonists Batman was after rather than saving the innocents trapped in the burning building. A narcissist to his core, Savant sees this as a slight against him, rather than an obvious and correct judge of his priorities as a crimefighter.

Flash back to the present, and Huntress is seen racing across Gotham searching for Dinah, a time limit in mind. The problem: Dinah dies in less than an hour unless Oracle gives Savant the identity of Batman. As Huntress and Oracle wrestle with different sides to this dilemma, a butler at Savant's headquarters, who we learn is a captive of Savant's in his own way, slips Dinah her communicator while giving her a cup of tea. Oracle is overjoyed to hear Dinah's voice, and sets up a clear path for Huntress to go and rescue her teammate. Just as Huntress arrives, Canary has managed to free herself in a bit of a bone-breaking way, and confronts Savant as best she can. Huntress, likewise, takes out some of the goons downstairs, all the while trying to find Black Canary. In a clever final frame, Huntress and Black Canary each express their expletive-laced dissatisfaction with, for Huntress, a giant goon and for Canary, the discovery that Savant has the keys to her leg shackles and the exit. The story ends there with the promise of a conclusion in Birds of Prey #59

Issue Worth?: Considering that this issues picks up in the third part of a story arc, I didn't feel lost at all. The narration from Black Canary was clever, appropriate, and didn't interfere with the main story that was being told. Savant seems like an appropriately arrogant and cerebral villain for Oracle, and obviously cunning enough to demand an interesting ransom in the form of Batman's identity. As with many BOP issues, this one had some action, a good mix of serious drama and of course some humor. Gail Simone's presence is definitely felt here, and I hope to find issue 59 in another dollar bin someday. Worth $1.00