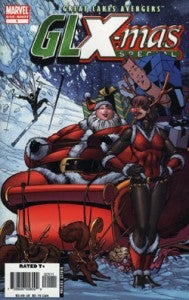 We're going to beat the heat with this latest installment of Dollar Bin Discoveries, our recurring feature that trolls the $1.00 comic bins at local stores and assesses if an issue is worth the whole dollar, or something less. This time, we're taking a little trip up to the Great Lakes area, and if you know anything about the Marvel universe , you know that means, you guessed it, an appearance by the Great Lakes Avengers! Finding this issue in the dollar bin was a lot like unwrapping that gift from grandma. You're filled with fascination at the thought of what might be inside, but also worried that you'll be stuck with something that causes you to secretly roll your eyes and file away in the back of the closet when you've spent five minutes with it. Without further delay, we're going to plunge into the icy cold adventures of one of the nuttiest teams of all time, The Great Lakes Avengers, and see how exactly they spend Christmas. Is this expanded-size one-shot worth the whole buck, or is it a lump of coal? The Book: Great Lakes Avengers GLX-Mas Special The Date: February 2006 Summary: This book collects a series of mini-stories, focusing on different members of the GLA. First up is the ever-popular/kitsch Squirrel Girl, who continues her storied history of defeating powerful villains single-handedly by battling MODOK over Lake Michigan, with Dum Dum Dugan on hand to witness it. Meanwhile, the other members of the GLA are called into a strange battle with "villain" Dr. Tannenbaum and his army of attacking Christmas trees. That story merely provides the frame for a very touching story centered around the relationship between deceased team member Dinah Soar and Mr. Immortal, who thinks on her during the battle against Tannenbaum. So much is said in this short story, and it's a true credit to Dan Slott, the writer of this special. It's full of emotion and what it means to be a human, something that Dinah Soar learned over the course of helping Mr. Immortal recover from personal tragedy until her death. And oh by the way, Squirrel Girl defeats ANOTHER Marvel baddie in the meanwhile. Seriously. Thanos. A small feature with the new (here today, gone tomorrow) Grasshopper follows, and then a feature on Doorman that's drawn in such a flat way that it takes some attention away from an overall great story about Doorman's new role as an Angel of Death and how his role as a hero has complicated things with his father. This may be the best story of the issue. It says so much in just a few pages, communicating the complex history of this family and how they would rather their son "do something" with his life besides be a superhero. A somewhat humorous story focusing on Squirrel Girl's squirrel sidekick Tippy-Toe follows. If you're a fan of old "Tom and Jerry" cartoons, then this may be the story for you, both in action and in look. To round things out, a nice closing scene with the entire team settling back together to enjoy the start of Christmas morning. There's a strange part of this scene involving Grasshopper that just seems out of place and odd, but it can be overlooked. Issue Worth? As a whole, the piece works. In keeping with the somewhat campy spirit of the team, there's enough humor, incredulous action sequences with Squirrel Girl and smart stories to keep it interesting. It's a shame that other characters on the team such as Flatman and Big Bertha don't get enough time to shine, but Squirrel Girl is arguably the most well-known member of the team, so perhaps it makes sense that more of the issue's focus is given to her. Even Uatu the Watcher shows up to verify her work! The stories all flow together nicely over the course of the Christmas Eve and Day events, and having Slott anchor the writing duties for every story, with guest artists drawing different stories, certainly helps with that. As far as Christmas Specials go, this book knows that it's a fruitcake, but hey, it owns up to it and many people out there live for fruitcake! Worth: $1.00