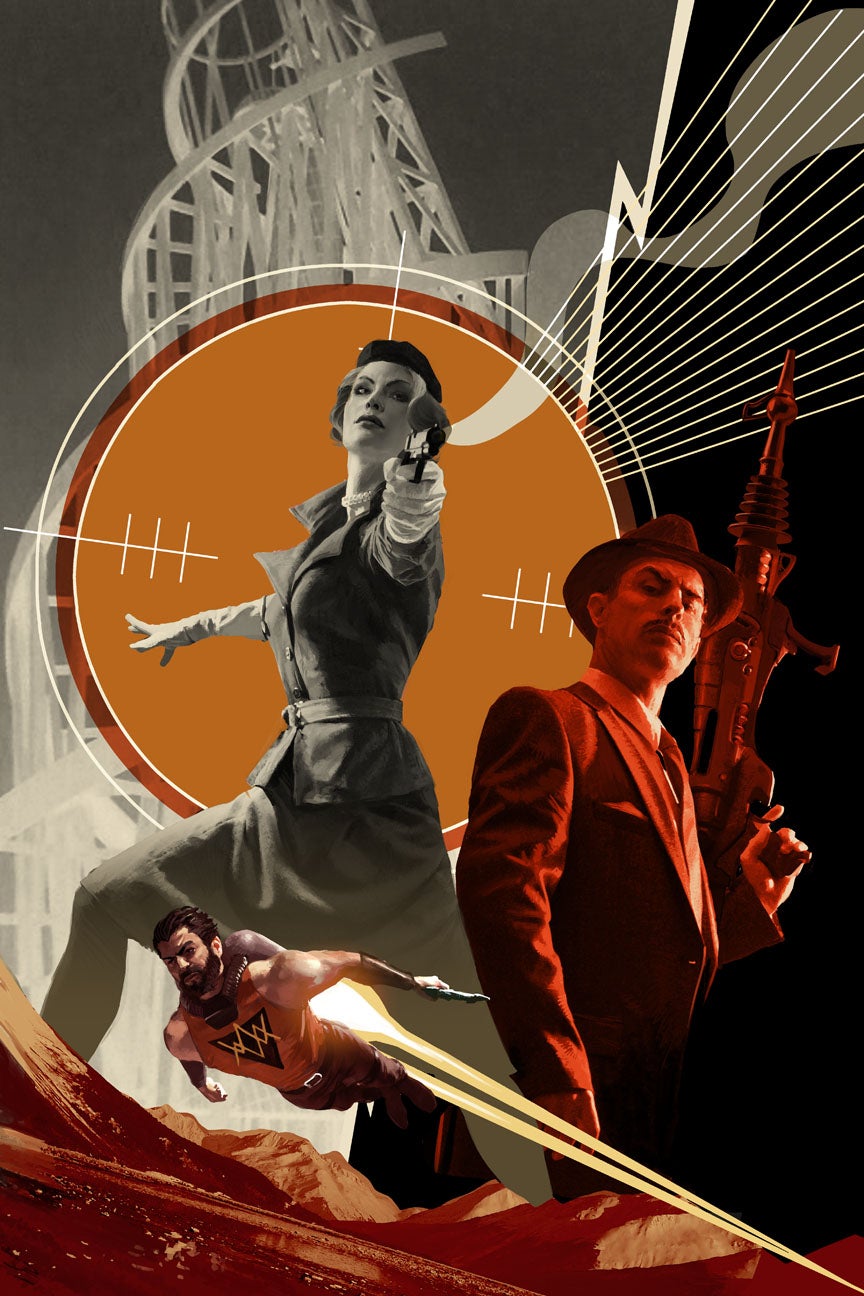 "Original Sin" may be long over, but Marvel still have plenty of skeletons hiding in the closet with their upcoming miniseries, "Operation S.I.N."

The woman tasked with unearthing those secrets is none other than Agent Peggy Carter, the star of ABC's upcoming Agents of S.H.I.E.L.D. offshoot, Agent Carter. Set during the Cold War, Agent Carter must race against the budding terrorist known as HYDRA in pursuit of an alien energy source. But she's not heading into enemy territory alone. Joining Peggy in her interstellar quest are none other than Iron Man's dad, Howard Stark, and mysterious alien hunter Woodrow McCord, who was last seen in "Original Sin."

That's a lot of ground to cover for a limited series. Luckily, Marvel picked the right agents for the task with writer Kathryn Immonen (Journey Into Mystery Featuring Sif) and artist Rich Ellis. Here, the creative duo spoke about bringing Peggy Carter and Howard Stark to life, playing in a world without superheroes, and mixing street-level grit with cosmic odysseys.

Even though Original Sin concluded some time ago, what made this the right time to tell Peggy Carter and Howard Stark's story? How will this secret mission and adventure reveal itself to the Marvel Universe?

Immonen: As far as I'm concerned, any time is Peggy time. But, I suspect the upcoming television show may have something to do with it.

While Peggy Carter and Howard Stark are well-established in the Marvel Cinematic Universe, they are both relatively blank slates in the comics. Kathryn, how do you plan to flesh them out as characters?

Immonen: I would actually argue that there isn't that much material for Peggy in the movie universe either, but there's clearly something about the character that has provided a great deal of traction. Peggy's got great bones, a solid and interesting skill set, and she's shown up at a rich moment in history. You couldn't ask for a better starting place. As for the 'how' of it, I feel like I was in much the same thing with Sif in "Journery Into Mystery." She loomed large in Asgard but had relatively little story real estate to back it up. So essentially, you look at what's presented and then put those characters at the centre of their own stories. I wouldn't say it writes itself, but it's really not hard to let Peggy loose.

To that end, how closely are the both of you working with Marvel Studios? This book will launch right around the same time as Agent Carter on ABC, which stars the same characters. Are you trying to establish a cohesive voice and consistent style for this period of Marvel history?

Immonen: They are separate entities, and I certainly have no contact with that side of the business. Having said that though, I don't think anyone wants there to be a massive disconnect and in fact, we were delighted to see the Agents of S.H.I.E.L.D. Carter cameo, and have words come out of her mouth that fortuitously/accidentally bang on our money.

What's interesting and unique about this specific time period--between World War II and the Avengers' assembly--of Marvel History that makes it worth exploring?

Immonen: It really is a kind of interstitial moment we're exploring, and world events serve as quite a lovely frame for the transitions that the characters are experiencing. Ideals are clashing with ideologies and optimism is proving difficult to maintain. 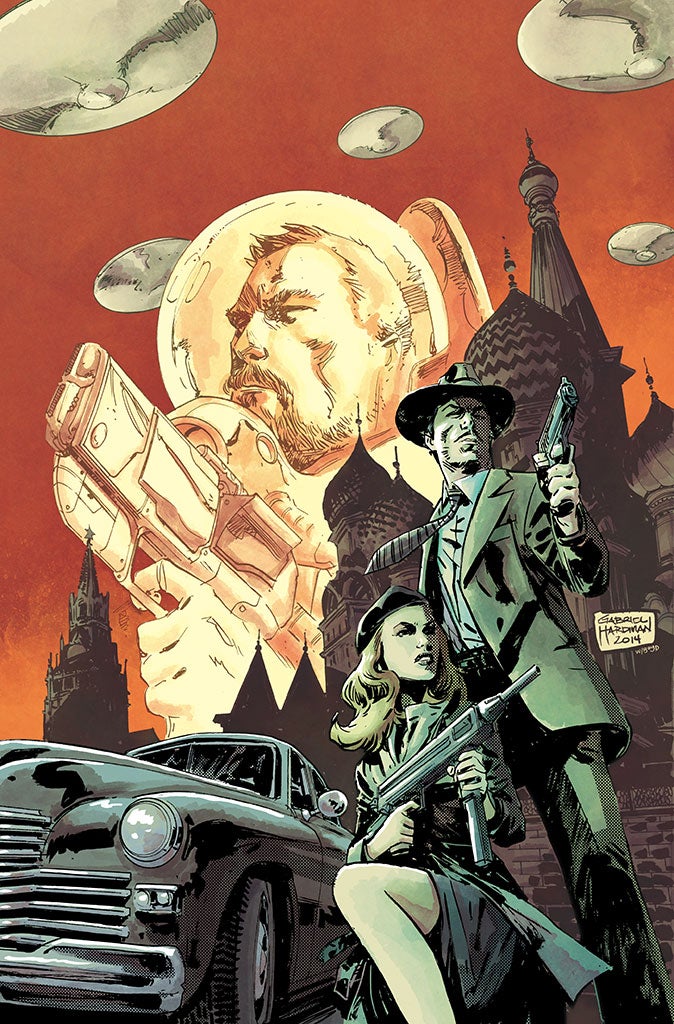 What role will Woodrow McCord play in this series? We've seen very little of him so far in the Marvel Universe, so how do you plan to fine-tune this character? And to that end, what's it like developing a character who has a significant presence, but is more or less a blank slate?

Immonen: Woody is doing what he does best, killing aliens. When he can find them, that is. And he's needing Howard's technical help on this one. As far as who Woody is, there's some terrific origin material coming that provided a really solid and inspiring foundation. So, maybe not such a blank slate by the time the first issue of Operation S.I.N. drops.

Rich, most of your portfolio has covered more pedestrian, or street-level stories. What has it been like shifting over into the more world of spy action and spectacle? How have you adjusted your style to suit a story that will call for more action and larger set pieces?

Ellis: In a lot of ways, this story is about the juxtaposition of street level heroes into a story with a more cosmic scale. I love drawing action, and I've worked on stories in the past, like "Memorial" for IDW, that have a truly epic scale. I'm no stranger to big action, and Operation S.I.N. gives me the opportunity to stretch my creative muscle in all directions. I couldn't be happier!

What role will Hydra play in this series? Even though the organization will still be in its infancy, how are you making Hydra a fearful and threatening antagonist?

The war may be over, but HYDRA's still trying to keep busy. Our splinter group is piggybacking on the Russian penchant for imprisoning some of their brightest minds in the remotest places. It doesn't go well.

It sounds like Peggy, Woodrow, and Howard have their work cut out for them. Thanks so much for chatting, guys.