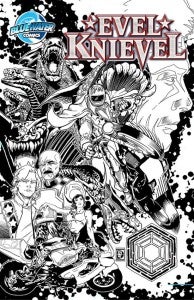 Bluewater Productions has just announced that they will be publishing a new comic book series about daredevil Evel Knievel. While Evel Knievel became famous for his death-defying motorcycle stunts, he will also be battling snake monsters and other evil-doers in the comic book series.

The Evel Knievel comic books, along with a graphic novel, will be published in both paper and digital form. The series will be written by Michael Dorman and Darren Davis and will feature art and covers by Dorman as well.  Alternate covers will be by artist Erich Owens.

President and Editor in Chief of Bluewater Productions Darren G. Davis said, “Our aim is to keep the legacy of Evel Knievel alive, presenting an homage to this amazing man that will appeal to adults who followed his career years ago, and introducing him to new fans among today’s teenagers.”

Knievel, whom the New York Times called “the quintessential daredevil performer,” was known both for making seemingly impossible jumps and for spectacular, bone-fracturing crashes – after which he would get back on his motorcycle and jump even farther.

Evel Knievel became a national figure when a first-ever attempted jump over the fountains at Caesars Palace in Las Vegas went horribly wrong. His body was slammed 155 feet onto the concrete pavement, and he was hospitalized with a fractured skull, broken pelvis, hips and ribs. Knievel was unconscious for a month. After recovering, he put on his signature red-white-and-blue leathers, rode his motorcycle into the Los Angeles Coliseum, and jumped 50 stacked cars.

Later Knievel staged his most ambitious stunt, which Davis says was the inspiration for the first comic book in the planned series. Knievel announced that he would make a one-mile jump across the Snake River Canyon in Twin Falls, Idaho. Rather than a motorcycle, he would ride a steam-powered “Sky-Cycle X-2” to soar high over the gorge, then deploy a parachute and return to earth.

Test runs of the Sky-Cycle were all unsuccessful, but on September 8, 1974, Knievel made the jump anyway, not wanting to disappoint his fans. The parachute malfunctioned, opening early, and the Sky-Cycle and Knievel dropped 600 feet to the rocky canyon floor. Landing just a few feet from the rushing waters of the Snake River, Knievel walked away with only minor injuries.

“In the comic book, the Snake River jump is just the start of Evel Knievel’s adventures,” says Davis. In the pages that Davis and co-writer and artist Michael Dorman will create, the daredevil will confront the evil Snake band of terrorists, and do battle with a monster snake that lives underground.

Accompanying Knievel on the pages of the comic book will be two teenage sidekicks, a girl and a boy, says Davis, to help younger readers relate to the stories.

Kelly Knievel, president of K&K Promotions and Evel’s oldest son, said, “My father is known as the Godfather of Extreme Sports, and extreme sports are enormously popular among today’s young people. We are delighted that this comic book series will introduce those youngsters to the amazing man who started it all.”

From his first daredevil performance in 1966 until his retirement in 1981, Knievel made hundreds of jumps, and was hospitalized more than 30 times by violent crashes. He made and spent millions, and spent several months in jail after attacking the author of an unflattering book with a baseball bat. His life story has been the subject of feature films, TV shows, books and even a previous comic book. He died in 2007, at 69, only days after giving rap artist Kanye West permission to use Knievel’s image in a music video.