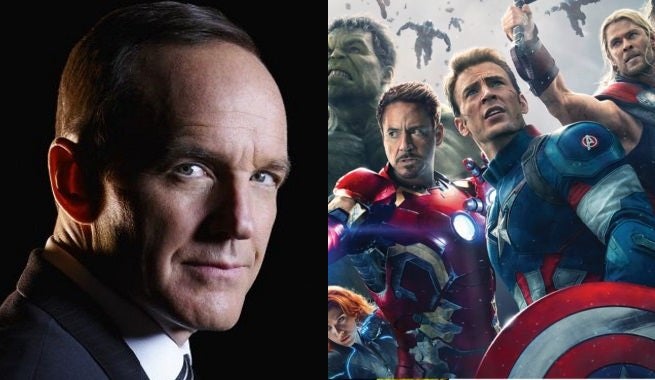 Last night's episode of Agents of S.H.I.E.L.D. filled in some blanks in the story of Avengers: Age of Ultron, explaining the full extent to which the two stories were tied together by revealing that Director Phil Coulson's secret Theta Protocol project was the building of the helicarrier that appeared at an opportune moment in the film.

We spoke to Clark Gregg and asked him what it meant to him for his character, who played such a pivotal role in the first Avengers, to have a role in the sequel, even if Coulson didn't appear on screen.

"You know, I'm a fanboy," Gregg said. "I was geeking out when I realized that – and I only knew this stuff at the last moment when I'm about to act it – when I realized that what I'm so desperate to get my hands on in the raid on the arctic Hydra base was the location of Loki's scepter, that led right into Sokovia at the beginning of Ultron.

"The scene in ["Scars"], where we find out what Theta Protocol is, with me and Patton Oswalt, that's a real thrill for me. I love the movie, and I love the connectivity of Marvel, so it's a thrill that in some way, whether the Avengers know it or not, Coulson's still got their back."

The last time we saw a helicarrier, several were being outfitted with the invasive surveillance technology of Project Insight in Captain America: The Winter Soldier. Could any of that technology still exist on the freshly minted helicarrier?

"That's a good question," Gregg says. "I can't say that I actually know the answer to that. I imagine that Coulson has a fair amount of weariness about Insight and the way that it was almost misused to subjugate the population that Coulson really feels that he's hired to protect, not control."

Be sure to check out our complete interview with Clark Gregg, where he talks all thinks Agents of S.H.I.E.L.D. and more.