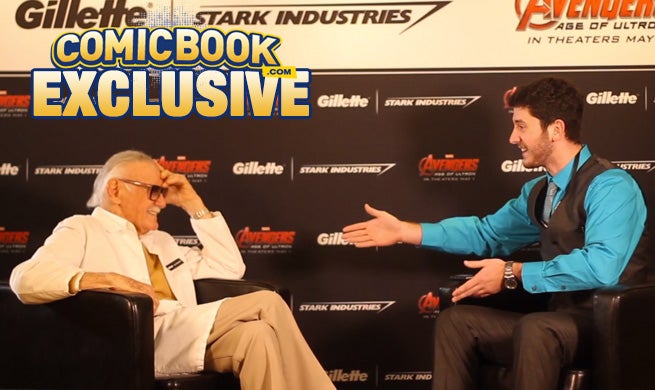 During an event hosted by Gillette, ComicBook.com had a chance to sit down with the man behind Marvel comics, Stan Lee for an exclusive interview. With Avengers: Age of Ultron right around the corner, Spider-Man heading back to the Marvel Cinematic Universe, and Secret Wars shaking up the comics, there was a lot to talk about!

CB: Did you ever think that all of this was possible?

SL: You know, years ago when I was doing these comics we’d give the comic books away free to people. The printer would send us a lot of comics- more than we needed. A guy would come up with the sandwiches from the drug store and we’d say 'on your way out, do you wanna take these books when you go?" That was original art work. We never thought it would be worth anything. I'm going back to the early days, you know? It's changed.

Now the family is all coming back together on screen. Spider-Man is coming back to the Marvel Cinematic Universe. Does that make you happy?

Of course! The more we can get them all together like the Avengers, it's fun. The public, they love those kind of movies.

Did you like Andrew Garfield as Spider-Man? Did you want to keep him or are you ready to see a change?

I don't know if I'm easy to please, but I thought Garfield did a great job.

I thought... what was the name of the first fellow?

Tobey Maguire! He's a friend of mine.. I forgot his name. He was wonderful! Maybe it's an easy role to play. I don't know. Maybe I might try out for it. Maybe I could be Uncle Ben.

I'm jealous of you! I want to be an actor and you're popping up in so many movies that all these people love!

The only thing that bothers me is they refer to them as cameos. I think of them as supporting roles.

Oh, they're worthy of an Oscar! Are you going to pop up in Age of Ultron?

Oh, just wait. Not only am I in Age of Ultron... I am in two scenes! One scene followed immediately by another, so you mustn't miss it.

Are you going to stop in to save the world?

I can't tell you. They would have to shoot me.

Oh, come on. They wouldn't do that! You're the man behind it all!

But for some reason, they never let me tell people what my cameo will be until after the movie and I'm dying to talk about it!

I can only imagine! That's how I would be. So, with all these character you've created... Now there's 9,000 or more character in this Marvel catalog. Is there anyone that you want to see in the movies?

It's amazing what's happening now. You guys can do anything.

Did you ever think there would be an Ant-Man movie?

Oh, come on! Years ago... But after the success of Iron Man and everything that's happened. Guardians of the Galaxy was amazing!

Are you gonna be in the sequel? You popped up in there!

I better be! Or I'll picket them!

So, back to the comics now, with Secret Wars coming out, that's going to be a game changer for Marvel. We might see a lot of stuff vanish a little bit. It all happened but people are wondering if it's all going to start over. Are you nervous about that?

No. Not the least bit. I'm just hoping they have a little cameo for me in the games. I've been in a lot of the games so far and that's fun too. It's always fun because I don't have to do anything and yet it's all being done and I sit back and people say "Boy, I thought you were great in that!" and I say, "Yeah, wasn't I?"

That's awesome. Is there any Secret Wars title you're specifically looking forward to?

Of course. Of course. I look forward to everything they do.

Is there a Secret Wars title you are looking forward to? How about the fact that Stan Lee will be in a Marvel movie twice for the first time in Marvel movie history?