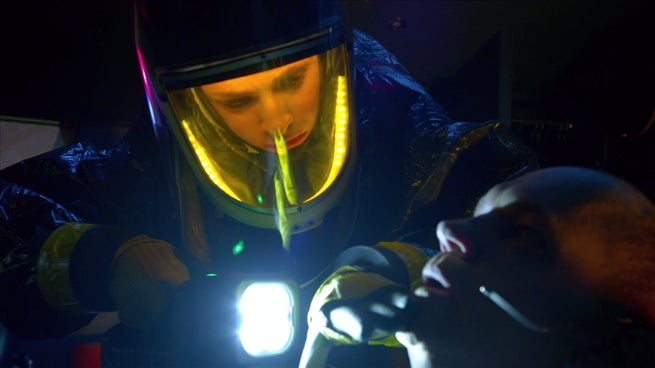 FX has provided ComicBook.com at an exclusive first look at some of the additional content that will be included in the home entertainment release of The Strain Season 1.

This “In the Beginning” clip features stars Sean Astin (Jim Kent), Mia Maestro (Dr. Nora Martinez) and Corey Stoll (Dr. Ephraim Goodweather) talking about how the show starts off with things looking pretty grim, with a plane full of a dead people, and somehow only gets worse form there.

The Strain, based on the trilogy of novels by Guillermo del Toro and Chuck Hogan, is a high concept thriller that tells the story of "Dr. Ephraim Goodweather," the head of the Center for Disease Control Canary Team in New York City. He and his team are called upon to investigate a mysterious viral outbreak with hallmarks of an ancient and evil strain of vampirism. As the strain spreads, Eph, his team, and an assembly of everyday New Yorkers, wage war for the fate of humanity itself.

The Strain Season 1 will be released onto Blu-ray and DVD December 2.

EXCLUSIVE The Strain "In The Beginning" Clip

Next Assassin's Creed Game May Be More Like Uncharted Than Valhalla