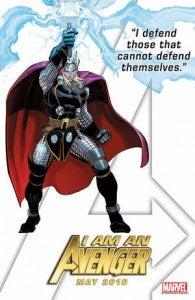 Over the past week, Marvel has been slowly revealing the first five members of its highly-anticipated relaunch of the Avengers series, which will be in the highly capable, talented hands of Brian Michael Bendis and John Romita Jr. Now, the dust has settled, the teasers have been shown, and now we know the first five characters who will make up the new team. So far, it appears to be an interesting mix of the classic team lineup and a bridge to characters of the past few years! As we see here, Thor will be in the lineup! It's going to be interesting to see how he overcomes the current events of Siege to make his return to the team that he helped to found! The artwork featured gives us a great tease as to what's to come, and just what sort of stance we can expect from our heroes as we enter a new era and age in Marvel Comics! Let's see who else will be joining the Asgardian god!

Next up is a character embodying a classic ideal but with a very modern update. Bucky's Captain Americawill make a return to the Avengers, taking the place of his mentor and friend Steve Rogers, who many speculated to be on the team as well. Could there be room for TWO Caps on the same team? These are just the first five members after all!

Another familiar face, and one that has had a very diminished role in the past couple of years, will be that of Iron Man, another original Avenger back to lead the team in a new direction! How will this classic character reestablish himself in a world that held him so responsible for the acts that led to the ascendance of Norman Osborn? Only one way to find out; read the book!! In the mood for a very new face on the side of Earth's mightiest heroes? Look no

further, for Jessica Drew, Spider-Woman herself, is here! She's been on quite a journey over the past few years, from New Avenger, to revealed Skrull queen, to hated face of the Secret Invasion, to an alien hunter and now an Avenger again! Bendis has always loved the character, so her appearance on the team shouldn't come as a large surprise, but what will happen to her along the way just might!

Rounding out the five members of the new team, none other than Hawkeye, everyone's favorite cocky archer! He's been on multiple incarnations of the Avengers over the years, and his choice could be a nice redemption of sorts for a character who has spent so much of his time in pursuit of true justice for the heroes of Marvel and the citizens of that world! So who else will join these fabulous five? Are they the only ones for now? What new adventures await them as they enter Marvel's "Heroic Age" under the steady hands of Bendis and Romita Jr.? May 2010 will tell us all we need to know, but be sure to catch their exploits while you can as Siege continues its staggering action and punch!