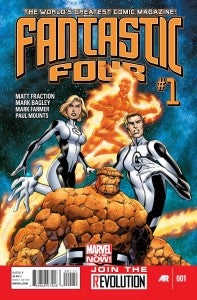 , Matt Fraction has been confirmed as the writer on the forthcoming Marvel NOW! relaunches of Fantastic Four and FF, with art by Mark Bagley and Mike Allred, respectively.

With Bagley on Fantastic Four, Fraction says of the title, "It's the first family, and we're putting family first," in a new interview with USA Today. And while Fantastic Four will feature the classic team, its sister publication FF will clearly be the more experimental of the pair.

With art by Mike Allred--which in and of itself should tell you the kind of book it's going to be--FF will follow Ant-Man, who leads Reed Richards' Future Foundation with the help of She-Hulk, Medusa (of The Inhumans fame) and a new character, Miss Thing, who is literally a woman in a suit or armor that resembles Ben Grimm's body.

That character promises to be the title's point-of-view voice, as she's a relatively normal human shunted into the strange circumstances of the title. According to Fraction, she's just the "celebutante" Johnny Storm happened to take home the night before the Fantastic Four leaves for a family break.

Insert your own joke about Hank Pym leading an all-female squad here.

Even Fantastic Four, though, won't necessarily be devoid of the experimentation that has made Fraction's just-cancelled title The Defenders a critical favorite. 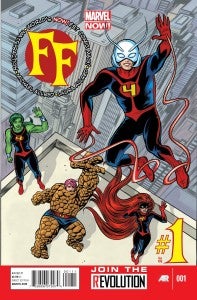 "It's very easy to say, 'I want to stay true to what Stan and Jack did.' Well, what Stan and Jack did was invent the entirety of the Marvel Universe in 104 issues," Fraction told USA Today, echoing sentiments that Mark Waid made during his stunning run on the title with artist Mike Wieringo. "This is the place to be wildly inventive, and I would like to put as many things down on the page as humanly possible and offer up another dose next issue."

The title, according to Fraction, will take place in a kind of tesseract space of time, with the familiy taking a year-long road trip (for educational purposes for the Richards kids) through time and space--one that will only seem to outsiders to have taken a few minutes. He told the newspaper that the whole story was actually inspired by former Maine governor Angus King, who took his family on the road to "see America in an RV" in the months following his retirement from public office.

Fantastic Four and FF Confirmed for Fraction, Bagley and Allred