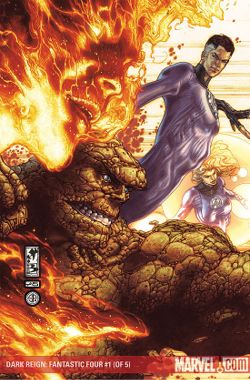 With Dark Reign expanding and expanding, it was only a matter of time before Marvel's First Family, the Fantastic Four, felt the impact. With Dr. Doom a part of Norman Osborne's "Dark Illuminati", there is an expectation that at some point Dr. Doom will be involved in some sort of colossal battle with the Fantastic Four. Fantastic Four: Dark Reign # 1 is sadly not that issue.

Not that this issue doesn't have some semblance of intrigue and developing plot in it, but it does take quite a bit of time to fully get to where it's trying to go in the last five pages. We see the story open with our heroes once again having to resettle themselves into a home, after a good portion of the Baxter Building was sucked into the Negative Zone by Lyja, a Skrull and Johnny's former girlfriend. As Franklin and Valeria Richards head home, Sue frantically tries to ensure that everyone is working to get the house in good working order, even Reed.

She finds him, of course, working in his lab, on a device that he believes can fix all the problems they've encountered of late, not the least of which is the Secret Invasion they've just recently experienced. According to Reed, the machine will allow him to observe how problems they've experienced in their universe were solved by other Earths. An interesting idea, and certainly something that Reed would be interested in, but the issue seems to take quite a bit of time leading us to that conclusion. It's actually a bit more preferable hearing Reed discuss his thoughts on Earth's current problems through his narration in the issue than having him explain it all to Sue, Ben and Johnny.

In a bit of a surprising turn, HAMMER, Osborn's replacement for SHIELD, storms the Baxter Building to shut down the Fantastic Four for not being in compliance with the new directives of the Initiative program.

They shut down the power just as Reed, of course, attempts to leave this time and space to venture off. Sue and the guys are left to try and figure out what's happened and where the agents are, only to step through a door and find themselves in what appears to be the Savage Land, with a couple of large, notable and perhaps recognizable figures in the background.

Overall this issue could have been more in keeping with what we've seen from the Dark Reign tie-ins so far, action, political cloak and dagger, and true perspective on the new situation America's heroes find themselves in. None of that really seemed present, and what makes this issue even more of a drag on your reading time is the fact that so much of the dialogue just seems wasted. More of the same banter and bickering between the gang, which is fine now and then, but this didn't seem to be the issue for Sue to be getting upset with Reed over his putting work before the needs of the house.

Here's hoping that the second issue of this five issue limited series begins clicking and truly draws on the intents and purposes of Dark Reign as a whole.