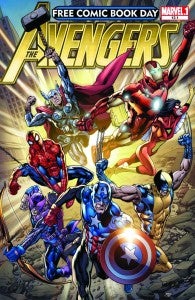 We're officially less than a month away from the first Saturday in May.  It may not immediately register as a hugely important day right off hand, but it's one of THE biggest days for comic book fans and those who like a good deal!  Saturday, May 5th, 2012 will mark the latest installment of Free Comic Book Day, a nationwide event that many comic book retailers take part in.  The event brings publicity to the comic book world, as retailers literally give away comic books to anyone who shows up.  Each store will likely have varying events and promotions going along with the comics, but always check and see if the comic book store in your area will be taking part!  Now, one of the biggest questions is just what ARE the comics that will be given away on that glorious day in May?  Here's a sampling of the comics that will be available on FCBD!! 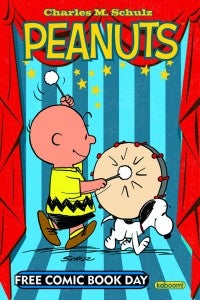 Comics for the Kids One of the biggest draws of Free Comic Book Day is the fact that so many of the books cover a wide range of interests and tastes.  There's also no shortage of books for kids of all ages!  This year's selection of books for children runs the gamut and starts with Peanuts Adventure Time Flipbook.  Charlie Brown and friends are always a good bet for children!  Two other titles that pull from popular kids' shows are Yo Gabba Gabba Free Comic Book Time and The Smurfs, which will also feature Disney fairies and Tinkerbell.  Fantagraphics brings you Walt Disney's Donald Duck Family Comics and there's also Top Shelf Kids Club, featuring popular characters such as Owly.  Another tried and true kids favorite will also be returning to FCBD this year, with Sonic the Hedgehog a guaranteed in-demand comic that day.  Th3rd World Studios brings Finding Gossamyr, a story about a brother and sister who are taken to the magic land of Gossamyr and use math magic to solve the, forgive the pun, problems.  As you can see, lots to choose from here!  Others include Mega Man, DC Nation Superman Family Flip Book, and Rockhead and Zinc Alloy 2-For-None.   Superhero Comics There are not as many of the "superhero" genre of comics this year as in others, but that doesn't mean that the quality is any less.  One of the biggest titles is Avengers: Age of Ultron.  This book is a great starting point for those getting back into the Avengers characters or learning about the team for the first time.  Also, Spider-Man Season One, featuring the first chapter of the Season One graphic novel.  Celebrate Spidey's 50th anniversary with this freebie!  For those in favor of more extreme justice, 2000 AD Judge Dredd Special is the one for you.  There's also the aforementioned DC Nation Superman Family Flip Book, and also for DC fans, there's a pretty exciting DC Comics the New 52 Special Edition.  This book gives the skinny on what's going on with DC's new 52 titles, as well as sneak previews of the upcoming "second wave" of books such as Dial H, Earth 2, and World's Finest.  Never disappointing is the FCBD edition of Atomic Robo, along with a blast from the past hero with Burt Ward Wonder Boy, a comic from the actor best known for his role as Robin on the 1960's Batman television series.  His efforts these days are focused on animal protection and care, and this freebie fits right in!  From Boom! comes The Hypernaturals, a story of a long lost super hero team and those who must step in to take their place.  Hmmm...maybe there IS plenty of superhero fare after all! 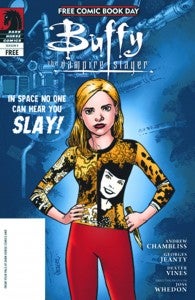 Ass-Kicking Sc-Fi A great pick-up this year for any big sci-fi and fantasy fan will be Buffy: The Guild, a rare offering of Buffy for FCBD fans!  Alongside her will be an epic two story issue with Star Wars/Serenity!  It's exactly like it sounds!  Two Whedon properties at no cost!  12 Gauge Comics offers up Anti, a story about a man forced to admit the truth that he is Earth's savior, all the while avoiding a demon invasion.  Classic TV show My Favorite Martian gets an issue this year, and do I really need to further explain the title Dinosaurs vs. Aliens?  Witchblade: Unbalanced Pieces also is an offering this year, and this is one of the more "mature" titles for the adult crowd to enjoy, based on storyline.  Witchblade is always a safe bet as a read, so be sure to grab this one!  Oni Press presents Bad Medicine #1, and for fans of medical murder and mystery, this one is a read.  It even features some headless fun, so how can you go wrong?  One of the biggest issues, literally and figuratively, this year is Mouse Guard: Labyrinth and Other Stories, which features a whopping 48 pages of content, all for free!  This is always a highly sought after series in stores, so don't miss out on your chance to snag some of the free tales here. Others Of course, there are also books that represent their own genres and niches, so don't worry if you haven't seen something you've particularly liked thus far.  Overstreet, will be releasing it's look at the current comic book market in Overstreet: Comic Book Marketplace.  Also, get a preview of Valiant's offerings with Valiant Preview.  Need more glimpses into the future?  Worlds of Aspen and Arcana Presents Intrinsic will showcase two other comic book companies offerings to readers.  Animal Planet: World's Most Dangerous Animals promises to entertain and educate all at the same time, and Transformers 80.5 will also school you in the ways of Decepticons and Autobots.  In celebration of their twentieth anniversary, Image Comics is releasing Image 20, a celebration of this milestone along with new stories promoting upcoming work from the company.  Graphic Elvis Preview will showcase the upcoming release of a graphic novel based on the songs and life of music icon Elvis Pressley, so as you see, there is literally something for every taste and person out there!  If you have questions about retailers near you who are participating or want to see synopsis for all of the titles being released that day, check out the homepage for Free Comic Book Day here!

Free Comic Book Day Preview! What are the Hot Books?