As part of our week-long focus on horror comics leading up to Halloween on Thursday, ComicBook.com sat down with best-selling author and graphic novelist Neil Gibson.

Gibson's book Twisted Dark was an Amazon bestseller and he recently began expanding his presence from being principally a U.K. guy--that's where he's based--to establishing himself as a voice in the American market, starting with an appearance at this month's New York Comic Con.

It was around that appearance that Gibson joined us to talk about, of all things, his new, all-ages project that will give him a break from the dark and twisted and allow him to explore his inner child--almost literally. 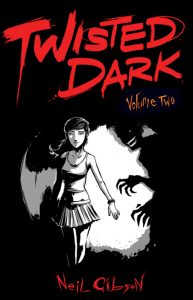 ComicBook.com: Alright, well, let me jump right in and say the first thing that dawned on me reading through some of the samples is, a kids' book doesn't necessarily seem like the immediately obvious direction for you, does it?

Neil Gibson: Ha! Well, some actors like the main character from Breaking Bad were pegged as comedy actors, but then they showed they have range.

ComicBook.com: Can you walk us through a little bit of what the new project is about? I haven't had time to go through everything yet and what I've seen of yours is on the darker side.

Gibson: Essentially it started off was a side project.

I was just starting to make comics and as a gift for my mother, I thought I would make one for her. The World of Chub Chub is my kid-friendly one.

My mother LOVES telling me (and in fact any stranger) about the stories of what I did as a kid. I was pretty naughty, but (apparently) had a bit on an angelic face so I got away with more than I should have.

While I was making other comics, I made some about me as a kid and gave it to her for her birthday. She was delighted by it and cracked up laughing. She liked it so much she showed it to her friends (which i was not expecting) and they liked it too, which I definitely was not expecting--I reckoned these were personal stories which only my family would get because they were there when it happened, but people really seemed to like it.

The problem was I had very poor quality art because it was a gift to my mother and didn't need to be professional quality, so when people asked when the book was coming out, I realized that there was a demand but if I was serious about it, I would have to find an artist.

More specifically, I had to find the right artist--that was the biggest bottleneck, and took me a year. I finally found her and the book should be ready in the next two months.

It is similar in tone to Calvin and Hobbes, but all the stories are based on what i did as a kid--and my poor, poor mother who had to endure all of the stories!

ComicBook.com: Finding an artist when you're not working with a major publisher is always one of the biggest challenges. How much of that is knowing a stable of artists versus finding them?

Gibson: Finding them is the hard part. I have had to fire/let go of 14 artists since I started, but now I am hiring more professionals and so that is no longer a problem. When I first started I didn't know if it would work and I wanted cheap artists. But you really get what you pay for.

ComicBook.com: And better production values all around as you've progressed. I've often said that lettering is the most undervalued part of making comics. It's very difficult to be taken seriously if your lettering looks amateurish.

Gibson: I didn't know that when I first started--I didn't know much about art either. I bought comics for the stories and the art was very much a quick 'I like it, or I don't' kind of thing.

When I started making comics, I didn't know how to judge good art, but I quickly learnt. Same with lettering.

I guess people who make films can instantly tell bad sound effects, editing, cinematography, directing, acting, make up special effects etc., but amateurs can probably only make out the acting, special effects and sound - and then they only notice when it is bad.

ComicBook.com: Yeah, it's very similar, I think. But of course since film is so much more mainstream, all of that is kind of widely understood

Gibson: Exactly. People talk about it a lot more. When I bought comics, none of my friends read them so I just enjoyed them on my own

ComicBook.com: So with the kids' book coming on the horizon, what's the thing that's driving most of your conversation with fans now?

I made a sample booklet of what the book would be like (with the old art) and it sold out.

I was so surprised that people liked it. It was originally a gift for my mother. So when I realised there was a demand I had to search for the artist as I said and it took a year--So I have tried NOT to talk about it because I keep fending off the delivery date questions. But the end is in sight now (at least for the first volume).

ComicBook.com: Do you find it's the same people reading this as read your last stuff?

Gibson: It is an interesting question.

I love comics and I think it is one of the most efficient means of communication. It is a shame that most comics are juvenile. People say they used to read comics as a kid, but then they grew out of them. That is a silly statement to me. It is like saying you used to listen to music but then grew out of it. You can grow out of certain content, but not a medium. And as I said, most comics were aimed at children, leading people to think it is a childish medium.

So I want everyone to read comics and to that end I am writing many different genres - thrillers, historical, humour, kids stuff, horror, sci-fi. Most of my readers tend to enjoy all the work I do, but the definitely have their natural preference. Some people only like one particular genre that I do.

Chib Chub will be a significant departure from what I normally do (think Roald Dahl with his adult focused macabre stories versus his kid stories). There will probably be very distinct reader groups. There will be some people who enjoy both, but because the genres are so different I expect a lot of people to only like one style.