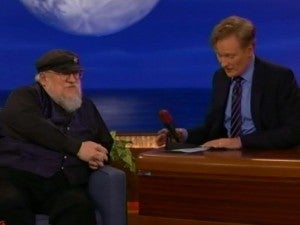 On Wednesday night’s episode of CONAN, author George R.R. Martin, who wrote the A Song of Ice and Fire series upon which Game Of Thrones is based, was one of the guests. Conan said, “First of all, let’s talk about the episode that just aired, the last episode on Sunday, melted people’s minds, not just me, my eyeballs melted out of my head. The reaction was stunning, and I was thinking, ‘What is it about this show Game of Thrones?’ And I realized you get us to really care about characters, love them, think they are central to everything, and then you kill them.”

George R.R. Martin laughed, “I do, do that, yes, it’s true.” When asked why he did that, George R.R. Martin explained, “I suppose you write the sort of stuff that you’d like to read. And as a reader or a viewer of television or film, I always like unexpected things. And I always like the suspense to be real. We’ve all seen the movies where the hero is in trouble, he’s surrounded by twenty people, but you know he’s going to get away, because he’s the hero. And yet you don’t really feel any fear for him. I want my readers and I want my viewers to be afraid when my characters are in danger. I want them to be afraid to turn the next page, because the next character might not survive it.”

At the premiere for the third season of the Game Of Thrones, George R.R. Martin said one actress begged him not to kill her character, but he knew that her character did die. George R.R. Martin said, “It’s one thing to kill these characters when they are just people on paper, but when you actually meet the actors who portray them, you know you’re making people unemployed, and it does bring up a certain amount of guilt feelings.”

When Conan asked if he knew how it all ends, George R.R. Martin said, “I know how it all ends. In broad strokes, I know how it all ends. I discover a certain amount of it as it goes. Of course, there’s no guaranteeing that the show will end the same way. I mean David Benioff and Dan Weiss, the showrunners who script the show, have been known to make changes, including in the Red Wedding. I already had a scene that many people considered extremely brutal and as bad as anything, and they turned it up to eleven by including even more deaths than I had in the books. So there are at least four characters who are dead in the TV show who are alive in books still. Hopefully, it will end the same way in the TV show as it does in the books, but we’ll see.”

David Oyelowo's The Water Man Gets First Trailer and Poster