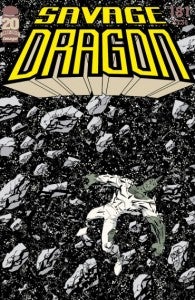 Although Gavin Higginbotham generally joins us for our monthly Q&A session with Savage Dragon writer-artist Erik Larsen, scheduling conflicts got in the way this time around and he wasn't able. He did, however, have some pretty interesting questions to ask about the issue--questions that may hint at some major developments down the road for Savage Dragon as a title. We wanted to make sure they got out there, so check them out below, and check back in a month for our regularly-scheduled Savage Roundtable. The first thing I noticed when I opened up this issue was that there's no title page. Is this a permanent change in format for the book (as permanent as anything is in this series)? What was the catalyst to make this change? A couple readers were lamenting about how the book used to be, years ago, with no titles and credits and how that was something which they thought made it stand out from other books and I thought about it and thought--I've done this long enough. I can ditch this for a while. This issue largely focuses on Dragon in outer space. It's the first issue of the new arc and somewhat mirrors the previous "INVASION" arc as that also kicked off with a Dragon-centric tale. Is this theme going to continue or will Dragon's impending return to Earth mean that Dragon will be more involved with the "main" story revolving around the kids? Dragon will be more of a presence in the book. I tend to go through phases as the title goes on and the characters progress. This is leading to what I refer to as my Batman Beyond period where Dragon takes on something of an older Bruce Wayne role. Lorella mentions that Krull has had the same training as his father had received when he was Emperor Kurr. It is also noted how badass Kurr was and yet Krull proceeds to get his ass handed to him in easy fashion by Dragon. Is Krull just a pussy? Or was it just that Kurr's ruthless streak gave him an edge? Kurr was just a vicious bastard and I think Lorella was overselling Krull. My impression was that Kurr was actually involved in more altercations. That he'd go down to planets to look check things out and get into brawls down there. I think he kept a lot of things from his people. They largely thought he was simply a powerful leader. He really didn't let on to the assembled people that he was such a heartless bastard. Did Dragon's rant against organised religion mirror your own? It's been a while since any kind of political or philosophical debate has graced these pages. Was this therapeutic to tackle as a subject? Or just something that was relevant considering the Krylans' situation? Both, really. I think religion is hogwash. I really do. And I think it's a lot easier for readers to think that an alien races sacred book is bulls--t than it is to think theirs is. But consider how many books we have, worldwide, that people cling to as if they speak the truth. They can't all be right. Man, you draw one hell of an annihilated corpse! AllGod's fate is pretty disturbing. Not a lot of people deal with the floating remains of a slaughtered giant. I thought I'd give it a go. Also, the reporter repeatedly referred to AllGod as "God"… Is this a hint to a future problem concerning religion and the seeming death of God? Could this play into the "Church of Savage Dragon" that has been previously hinted at? Absolutely. Rex and Malcolm's discussion about the aftermath of the invasion was interesting. This kind of disaster always seems to be brushed aside in most comics. All-out devastation is restored by the next issue. We've seen in past issues of Savage Dragon that that is not the case here, but again, it's an interesting observation on comics. Thanks. But the rest is true as well. There's a real push made to get things back to normal following something devastating like this. We push to get kids back in school and folks back to work as soon as possible as that helps with the healing process. The Overlord storyline is continuing at an interesting pace. That new Vicious Circle member that confronted him is right though. The VC has suffered incredible losses since Overlord came onto the scene. He means well--or thinks he does. Darklord literally jumped ship at the end there. He's been fairly conspicuous by his absence in the past few issues. I guess he's off to plan anew now that Dragon's heading back to Earth? Was getting Dragon alive and back home his ultimate goal at this stage? Yeah. More will come of this later--all of this. I seldom throw anything away. It's all fodder for a later adventure as one event folds into another.