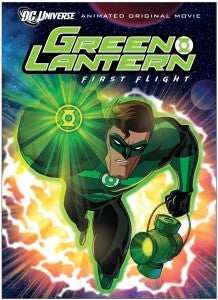 It's good vs. evil, teacher vs. student, yellow vs. green and nothing short of the fate of the universe is at stake when all these forces collide in the latest entry from Warner Bros. and DC Comics in their animated features, Green Lantern: First Flight. Christopher Meloni, of Oz and Law and Order fame, stars as the voice of cocky pilot Hal Jordan, who is about to have his world turned upside down by an encounter with dying alien, and Green Lantern himself, Abin Sur. How does Hal Jordan fare in his first solo flight onscreen? After a somewhat bumpy takeoff, the feature finally hits a smooth stride. A fiercely dramatic opening introduces us to Hal Jordan, at his job as a test pilot, when suddenly he is snatched away by a dying Green Lantern, the aforementioned Abin Sur, who passes on his power ring to Jordan. He accepts the power readily, and in an odd sequence, Jordan reappears back at his work, no real explanation needed or given. Fans of the character, who are already familiar with the character and his origin, will appreciate the jump right into the action, but those who are new to the universe of the Green Lanterns may want a bit more buildup and development of who Jordan is and why he's suddenly chosen for this not quite clear role, especially if they have not seen Justice League: The New Frontier, which set up Jordan's origin already. As Jordan adjusts to his role, and tries to prove his worth to the Guardians, those responsible for the power rings and protecting the green element that powers them, Sinestro, one of the most senior Lanterns, vouches for him and agrees to take him under his wing. It's here that the feature begins to find its narrative cohesion and path, as Sinestro enlists Jordan's help in tracking down Sur's killer, a being known as Cuch. It's here that our first real hints at Sinestro's drive for order and discipline become clear, and Jordan begins to grow into his role as an enforcer of decency and responsibility. It's interesting that Sinestro is given the task in this film of being our expository vehicle, as he educates Jordan on the role of the Guardians, the green element, and other aspects of what it means to wear a power ring. Here those new to the character will appreciate the details, but those who know all this should not find it to be a distraction, as these details continue to reveal Sinestro's true nature to us. The mystery continues to unfold, as we learn about a being, Kanjar Ro, and his connection to the location of the yellow element, an equally powerful force to that of the green element. It is during the Green Lantern Corps' chase for Kanjar Ro that Jordan shines, as he shows ingenuity, grit and determination in attempting to bring the villain in. In a pivotal twist of fate when Ro and Jordan battle, Sinestro enters the game and commits a shocking crime, revealing his agenda to the viewer and framing Jordan for the crime. The plot twists don't stop here, as Sinestro's thirst for power and control reveals a traitor in the midst of the Corps, and the emergence of the deadly power of the yellow element comes to full fruition. Sinestro, now fully empowered in yellow, displays an amount of violence and death that is quite surprising, and as the Guardians and other Lanterns stand helpless, Jordan finds a way to pull through. The climactic battle between Sinestro and Jordan is mostly lacking in dialogue, but it only serves to highlight the imagination and creativity the power of the ring gives the wearer, and it allows the battle to unfold in its own pace, letting the viewer pay attention to the display of power unfolding before them. As the film draws to a close, there is hope for the Guardians, the Corps, and newest Lantern Hal Jordan! Veteran actor Victor Garber, of Alias fame, is effective as Sinestro, and a very welcome addition to the film is the portrayal of several prominent Green Lanterns, such as Kilowog, Tomar Re, and Boodikka, each of which is given enough screen time to become key elements of the plot. As a whole, fans of the series and the character will appreciate story's direct relay into the action and storyline, and those checking out the film for fun will find their way after a very short exposition in the beginning. Slick and detailed animation adds to the story, and Sinestro's character is fleshed out well. There are a few instances where it seems that the story is more about him than Hal Jordan himself, but the final minutes of the film seem to work to help remind us of who the real hero of the piece is. Overall this is another solid entry into the DC animated universe, one that does help to establish a hero through a plot that centers on much bigger ideas of power and morality.