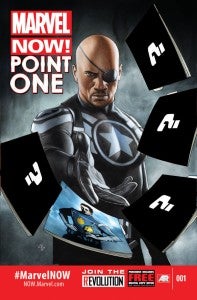 The final file held by Nick Fury, Jr. in the Marvel NOW! Point One teaser image that Marvel has been working all week long features Star-Lord, one of the Guardians of the Galaxy.

As the next major Marvel Studios film to go into production after Captain America 2: The Winter Soldier, Guardians of the Galaxy has long been rumored as one of the new titles rolling out of the Marvel "relaunch," most usually attached to current Avengers Assemble author Brian Michael Bendis, who will take over All-New X-Men in October.