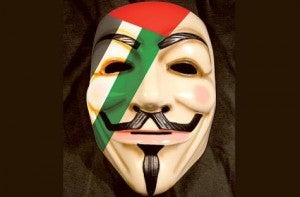 Officials in Dubai have issued a statement warning protestors during the upcoming National Day festivities on December 2 that they will be subject to interrogation, arrest or other consequences if they're spotted wearing the Guy Fawkes mask popularized by Alan Moore and David Lloyd's V for Vendetta, reports Gulf News.

“Using any symbol that insults the country or instigates unrest against its system is not allowed," said a police official. "We urge citizens to celebrate using other symbols such as national flags, slogans or photos that are more appropriate to the happy occasion of National Day.”

Guy Fawkes was a Catholic revolutionary activist whose terrorist plot to assassinate King James I failed, and whose effigy is burned on Bonfire Night on November 5 in the United Kingdom. A modified version of his plot was used in V for Vendetta by "V," the nameless protagonist who hid his face behind a Fawkes mask. The icon has become popularized among populist protests and uprisings worldwide since the 2005 film adaptation of Moore and Lloyd's work.