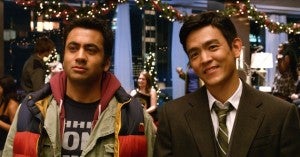 A long-in-development animated series based on the popular Harold & Kumar series of stoner comedies will be one of eight pilots coming to Cartoon Network's [adult swim] block of programming next year, including projects from Community's Dan Harmon and Seth Grahame-Smith of Abraham Lincoln: Vampire Hunter fame. An untitled Harold & Kumar project has been floating around since November, when A Very Harold & Kumar Christmas in 3D hit theaters, but looks like it's finally going to be a reality, from writers Jon Hurwitz and Hayden Schlossberg, who wrote the most recent film.  John Cho and Kal Penn, who starred in the films, are lined up to voice their characters on the small screen, duplicating a business model that hasn't worked very well in the past, from Bill & Ted's Excellent Adventures to Napoleon Dynamite (although Clerks is reportedly coming back next year). No word on whether How I Met Your Mother star Neil Patrick Harris will voice himself, although if he didn't it would seem to render the whole thing rather moot. With rumors that Dan Harmon will be ousted as the showrunner on NBC's Community, it's particularly notable that he's bringing his new project somewhere else, an indicator that there may be some truth to rumors that his relationship with the network is strained. Harmon and co-producer Justin Roiland are developing Rick & Morty, a rare-for-the-network 30-minute show that revolves around "a genius inventor and his less-than-genius grandson," which sounds like it will be nicely compatible with Grahame-Smith's pilot, Rolling With Dad. According to The Hollywood Reporter, Rolling With Dad follows a physically-disabled man who is far and away the smartest person in his dysfunctional family. The Internet-based sketch comedy troupe Green Bench also have a pilot that will allow them more or less free reign over a half-hour chunk of time, while Coffin Dodgers sounds like a promising series about a group of old folks who entertain themselves at the home by getting into trouble and Freestyle Love Supreme (about IT guys who annoy their co-workers by rapping at work) seems like an idea that couldn't sustain beyond a single, funny pilot episode. Colonel Wallace and King Star King round out the offerings with a pair of comedies that appear to be parodies of Kentucky Fried Chicken's Colonel Sanders and He-Man and the Masters of the Universe, respectively.