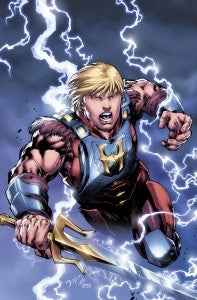 What is it that DC has against bikini briefs? First it was Superman--and now He-Man, the Master of the Universe. This afternoon on the DC blog, the publisher debuted a new look for the character, giving him pants for the first time since he was created 30 years ago. "In the epic war against the forces of Hordak ripping through the pages of the current series, He-Man must don the sacred armor of his ancestors," DC explained. "While fans may be surprised by this turn of events, this dynamic direction for one of the world's best-known heroes is firmly rooted in the classic legacy of Masters of the Universe. After all, so long as you stay true to the core concepts, it's always exciting to explore new possibilities, right?" The art (and presumably the redesign) is by Andy Benes, although one assumes that a new costume doesn't appear in a vacuum and that the licensor was heavily involved in these decisions. Especially with a movie in development. I know if I were Master of the Universe, I don't think anyone could make me wear pants. Just saying.

He-Man Gets Pants, New Sword and Armor From DC Comics