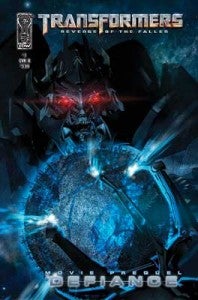 Award-winning comic book company IDW may have just scored a major coup in the ever-evolving realm of digital comic books. The company has announced plans to release a new line of digital comic book applications available for the iPhone and the iPod Touch, two wildly popular new technologies. What makes this even bigger is the fact that IDW has tied this in with the release of their Transformers: Revenge of the Fallen movie adaptations and prequel comics. The company plans to release twelve of these comics that will be tied directly to the movie, and IDW will certainly be opening up a new playing field to those readers who may only come into contact with a comic book because of a film. The Transformers comics will have their own custom landing page on the iTunes store, and promise easy to navigate page-by-page operation. While IDW has published digital comics before, this is the first major rollout from their new ePublishing division, directed by Jeff Webber. IDW has made a smart and potentially very lucrative move with this announcement, as Transformers: Revenge of the Fallen opens in theaters next week! Image from IDW