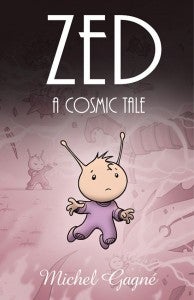 Image Comics announced today that they will be publishing Zed: A Cosmic Tale graphic novel by multi-media artist Michel Gagné. Zed: A Cosmic Tale is a science-fiction series, which was originally self-published over a period of eleven years starting in 2001. For the collected publication, some of the art and writing has been revised and reworked by Gagné.

"I fell in love with comics at an early age, and recall wanting to be a comic artist as one of my first childhood dreams", said Gagné. "I later became interested in animation and special effects and pursued a career in that field. Despite this new passion, I never wavered in my love of comics and ultimately couldn't shake the festering desire to create my own series. In early 2001, after finishing up a demanding job as Head of Special Effects at Warner Brothers Feature Animation, I took time off to make that dream come true. This is how Zed was born."

The original Zed series was published in 10 issues, spanning from July 2001 to January 2012. Zed is a cute young alien, who becomes the target of a galactic villain because of his invention. Zed has to find the courage to save his home world from destruction.

"I planned to tell my tale over a period of ten issues and felt pretty confident, at the time, that I could have the whole thing wrapped up and published within a couple of years," said Gagné. "Little did I know that it would take me eleven years to finally bring the series to fruition. Zed is, first and foremost, a labor of love which I created at my own pace. The comic series became a way for me to build my graphic novel."

"The disparity from one issue to the next was less visible when separated into individual comic books, but all strung together in graphic novel form, the inconsistencies became painfully obvious", said Gagné. "When putting the final book together, I didn't treat it as a straight reprint book. I spend several months reworking the art and writing to make it more cohesive. I consider Zed: A Cosmic Tale published by Image Comics to be the definitive version of the story."