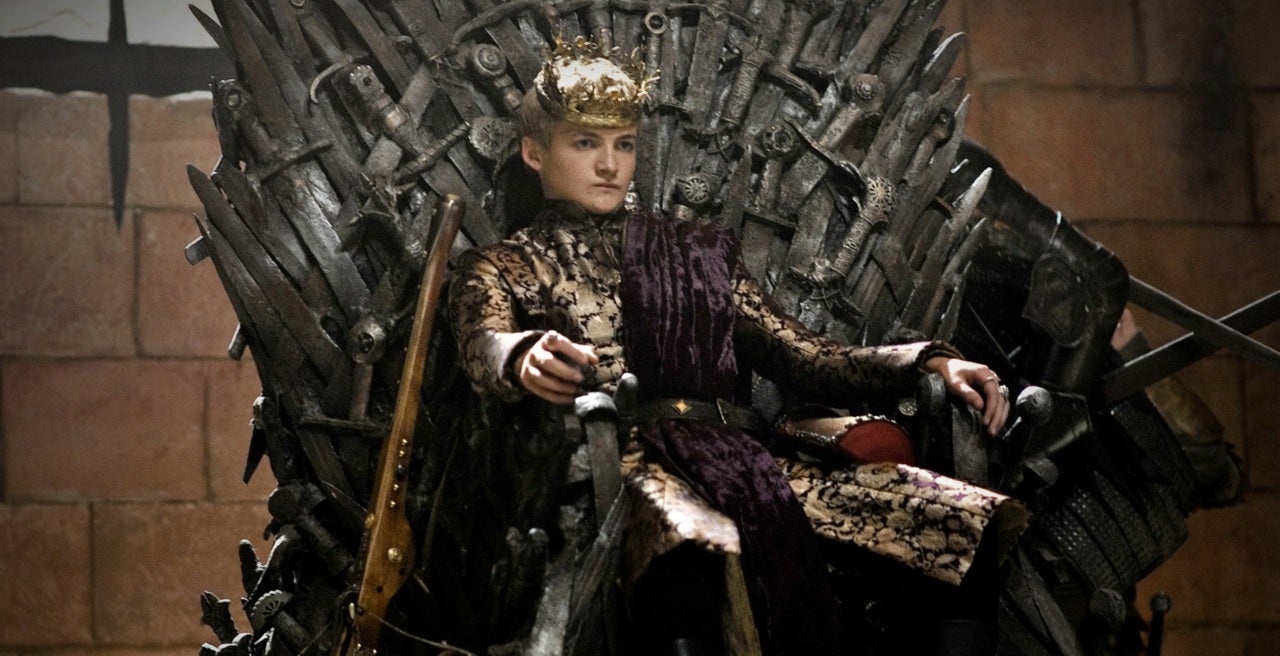 *Spoilers for Game of Thrones*

“Mother’s Mercy”, the title of the fifth season finale of Game of Thrones, rings with cruel irony at the end of the episode. There’s not a scrap of mercy to be found throughout it. Revenge, punishment, and betrayal are all there is.

While many of those who suffer in “Mother’s Mercy” are noble or kind hearted, like Jon Snow and Myrcella Baratheon, there are just as many less-than-pure characters who meet cruel fates. Cersei Lannister’s brutal walk of shame through King’s Landing serves as the episode’s centerpiece, while both Meryn Trant and Stannis Baratheon meet even worse ends.

Each of their terrible fates come as a result of their own terrible actions. They have murdered, lied, and raped to get where they are now. Yet the show does not present these final scenes as triumphant or fair. All three receive the same treatment as Jon or Myrcella when they are brought low. In Game of Thrones suffering is a constant, no matter who is experiencing it. There is no moral judgment to be found as the perceived villains of the series fall; they are shown to simply be people in the end.

Each of these three scenes focus upon the humanity of the victimized characters and the consequences of their suffering in different ways. The series’ perspective of the world and morality becomes easier to discern by examining how its worst characters fall. 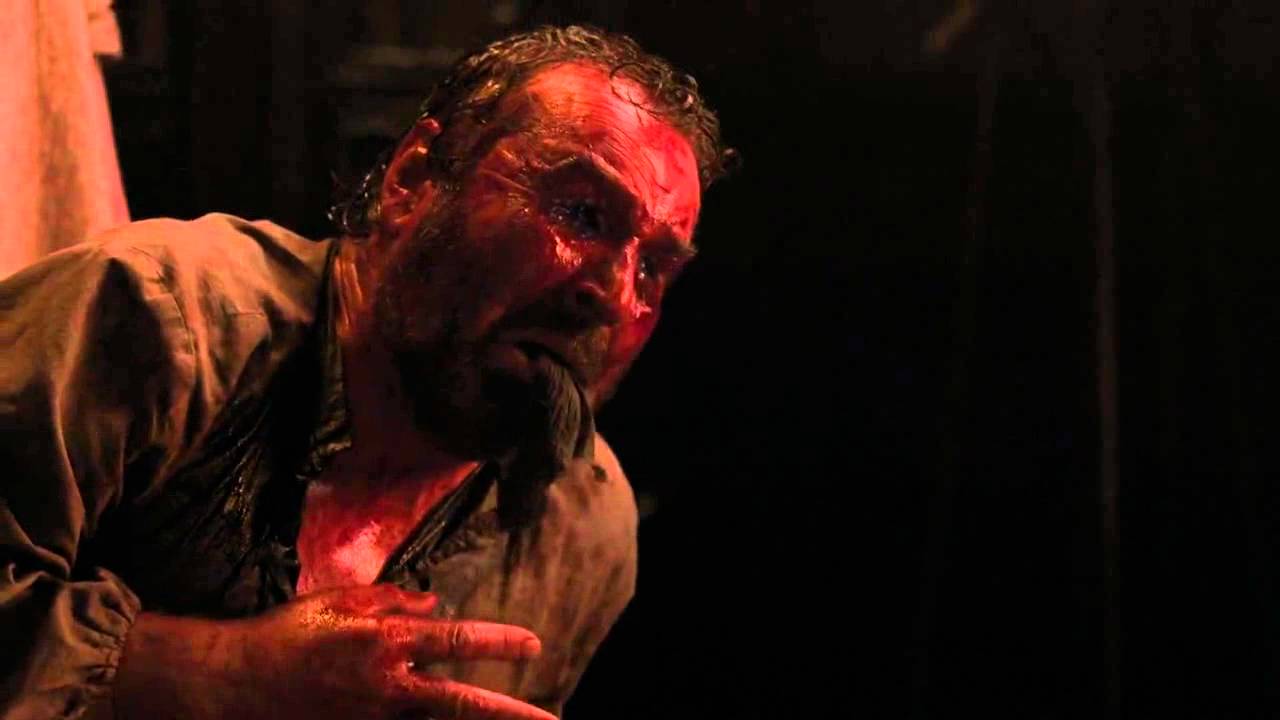 A Lonely Death in Braavos

Meryn Trant lacks redeemable qualities as much as any other character in Game of Thrones. He is the King’s Guard who slew Syrio Forel, beat Sansa Stark, and was recently revealed to be a pedophile. If he received more screen time, he would be just as hated as Ramsay Bolton. But his death does not depict a dangerous man being stopped, but a defenseless one suffering under the knife of a sadist. Once Arya gains the upper hand in their confrontation, she drags out his death as long as possible. He is framed to be smaller than her through most of the scene, shown to be powerless after his eyes are removed. The detail of his missing eyes also purposefully reflects the loss of Oberyn Martell, a beloved character, making it that much harder to ignore.

Arya’s treatment of Trant, in both his torture and death, reveal the act to be inherently cruel. She does not even attack Trant because he is harming children, but because he is the first name on her list. It is an attack motivated purely by revenge, a fact exposed as she draws out his death and makes sure he knows who she is. Furthermore, her pursuit of Trant ignores the even greater threat of a fraudulent insurer of sailors, who is leaving entire families to starve.

Trant’s death not only involves his own destruction, but that of Arya as well. While she considers herself stronger, we see her develop the type of monstrous traits she believes herself to be combatting. Arya is shown to be villainous, committing murder with the same relish as Gregor Clegane as he loomed over Oberyn. 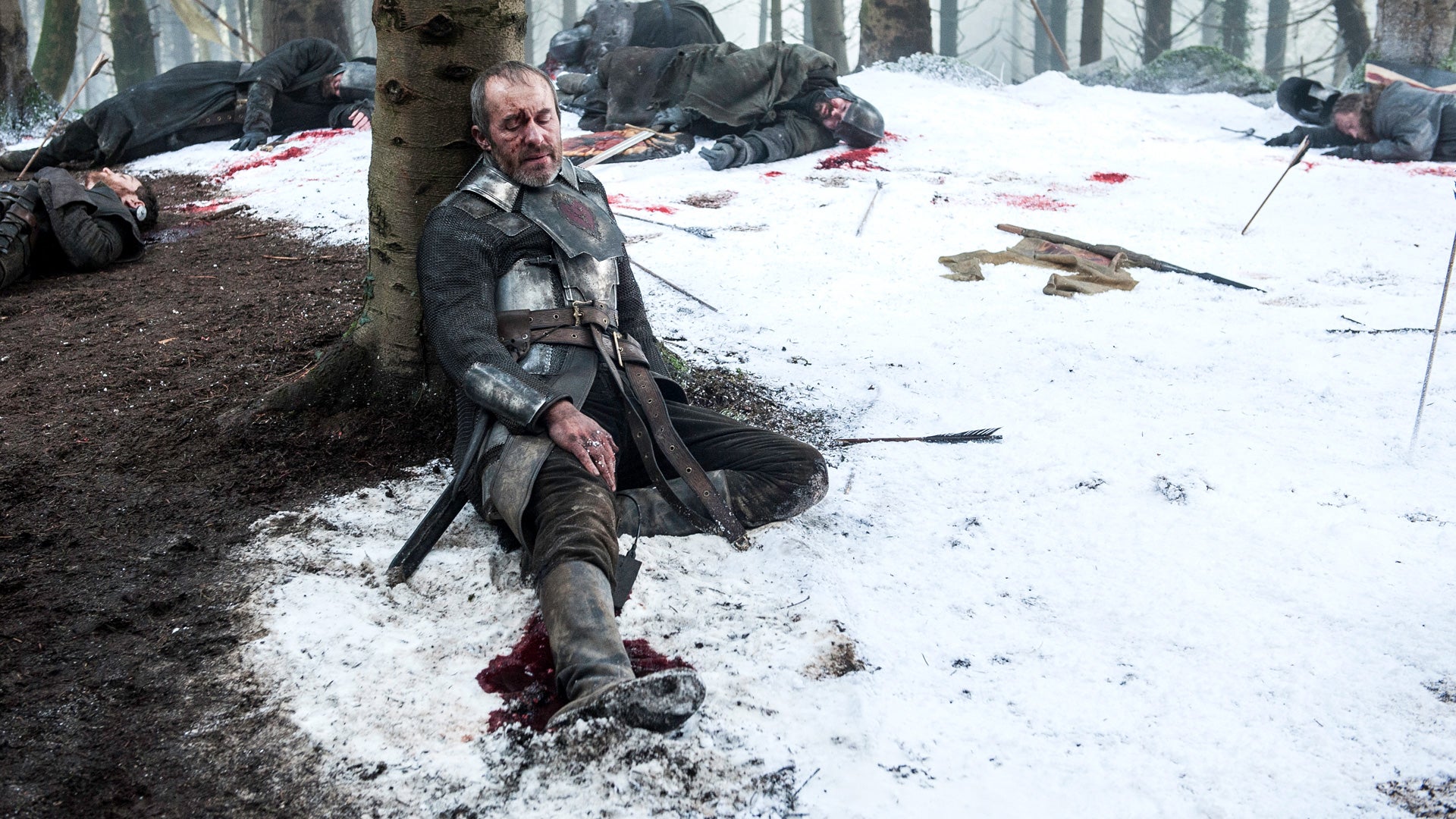 The Fall of Stannis Baratheon

Stannis is a character who has not been as openly villainous as Trant until recently. The choice to sacrifice his own daughter revealed a truly monstrous side of his character that had not been glimpsed since he murdered his own brother at the beginning of season two. Yet this choice led to his complete downfall. In the course of a single episode his wife kills herself, his closest advisor and half of his army abandon him, and he loses what is left in a battle. So when he is confronted by Brienne of Tarth, he is a man with nothing left to live for.

When Brienne first appears, he is shown on the ground bleeding, significantly smaller than his accuser. Again the power differential between these two characters is enormous. Brienne tells him why she is here and that she plans to execute him, to which he can only respond “Do your duty.” He is no longer a threat to anyone and nothing can be achieved from his execution except for Brienne’s own satisfaction.

Yet Brienne’s choice to pursue vengeance steers her away from her oath to protect Sansa Stark, and the first opportunity to aid her in a moment of need. Just as she makes her decision to pursue Stannis, Sansa lights a candle to call her, but it is too late. Stannis’ death (if he really is dead, no body is ever shown) has only worsened the situation of a good person struggling to survive. 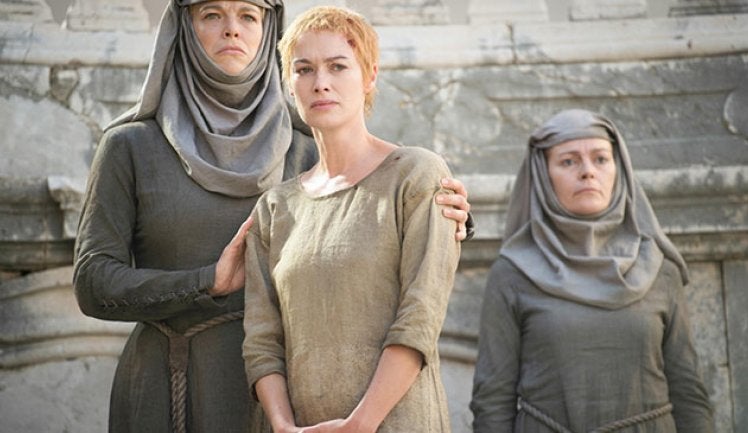 Just like Stannis, when Cersei meets her comeuppance, she is no threat to anyone. She has been removed from power and tortured by the Faith Militant. Being forced naked through the streets of King’s Landing to have insults, rotten food, and feces flung at her is simply the next step in a long journey through hell. The act is not one of penance for Cersei, but of empowerment for her captor, the High Sparrow.

The walk of shame is shot in an incredibly precise fashion. Handheld crowd shots emphasize the madness and fury of those who surround her. They mirror the audience, reflecting the bloodlust that has surrounded the character amongst the Game of Thrones fanbase. Meanwhile, constant close ups on Lena Headey reinforce her own humanity and suffering. Wider shots of Headey's body double often loom above her form or force the audience to stare directly at her, again asserting her lack of power. She is not a monster in this scene, but a person ravaged by everyone around her.

At the end of the walk, Cersei has been left sobbing in the fetal position, broken by the people of King’s Landing. Yet she is not powerless. She is lifted by Ser Robert Strong, the unstoppable zombie creation of her associate Qyburn. This is not the end of Cersei Lannister. She has been restored to a position of power and given another reason to lash out at the people of King’s Landing. This is only the beginning of a worse world, driven by a Lannister who will undoubtedly live up to her house words: “Hear me roar.” 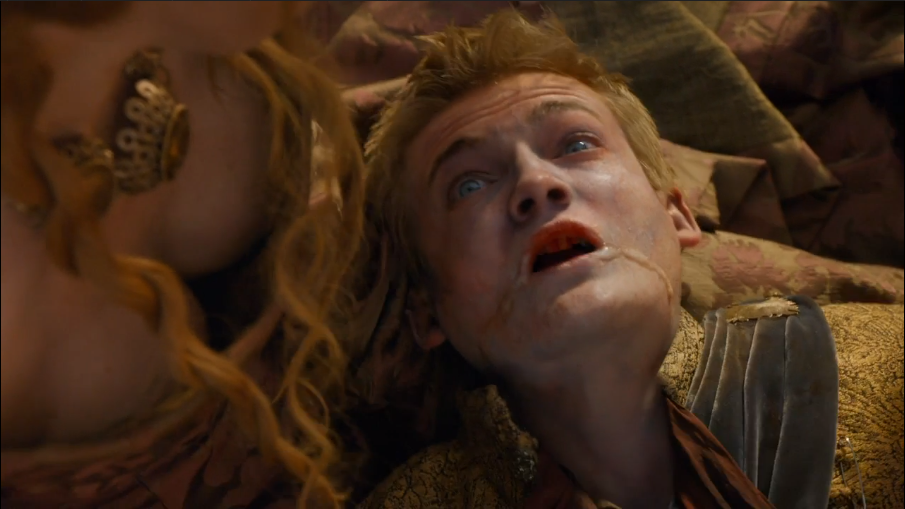 Just as many “bad guys” as “good guys” fall in “Mother’s Mercy”, but nothing about the episode portrays these deaths as a sign of hope or balance. That has always been true within Game of Thrones, but never quite this obvious. Even when Joffrey Baratheon, the most hated and sadistic character in the show’s history, died his death was presented as a terrible moment. The camera frames him as a terrified, confused child dying in his mother’s arms, not a defeated monster.

What comes after all of this death is bound to be worse. Every act of vengeance and violence in Game of Thrones, no matter who it happens to, makes the show a darker place. Killing is shown to be an impotent act, claiming the lives of those who are no longer effective or allowing worse evils to fill their place. Even when heroes get revenge, they are lessened by the act and hurt others as a consequence.

The only true villains in Game of Thrones are the monsters that are coming from the North. White Walkers (referred to, purposefully, as The Others in the novels) and Wights are the only beings devoid of humanity. They are the true threat to the Seven Kingdoms, capable of ending every life, heroic, villainous, or otherwise.

There has been a cycle of violence from the beginning of the show, one that has encouraged everyone to ignore the true threat of the series. It has continued forward, seemingly without end, wiping out Starks and Lannisters, men and women, sadists and innocents. The only way to end that cycle is not to destroy one side or person, but to stop killing one another and prepare for winter. Until the characters of Westeros are ready to do that, they will continue to fail together.

In The Game of Thrones, There Are No Villains