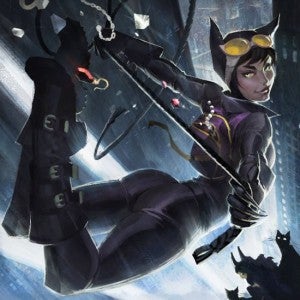 Infinite Crisis is an upcoming multiplayer online battle arena (MOBA) set in the legendary DC Multiverse and in development by Turbine. As Gotham City master criminal turned mischievous vigilante, Catwoman's attitude starts fights as quickly as her martial prowess ends them.  After her mother's suicide, Selina Kyle's father drank himself to an early grave. Selina was moved to an abusive state home from which she quickly escaped, taking to the streets. Petty thievery quickly became talented burglary, until she encountered Batman. The two soon discovered a mutual attraction, but due to… complications, neither party has ever fully committed to a romantic relationship. Catlike reflexes, mastery of the martial arts, and a deadly whip make Catwoman a formidable and resourceful opponent.