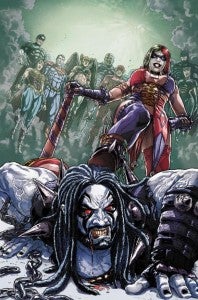 DC Entertainment announced today that the newest chapter of the best-selling Injustice: Gods Among Us digital-first comic book series is the final one of the current arc. After today, the series will take a fall hiatus and return in January. Meanwhile, though, there will be an Injustice Annual releasing on November 13. It's not clear whether Taylor--who is taking over DC's Earth 2 this winter when James Robinson leaves--will be writing the annual or whether there will be a fill-in creative team, but since Bryan Q. Miller has been responsible for the Smallville specials, it stands to reason that Taylor will be the writer. "Creating a weekly comic and maintaining the standards we set for ourselves has been a real challenge, and I think our incredible team of artists, colorists, our letterer, Wes Abbott, and especially our tireless editor, Jim Chadwick, should all be given shiny medals and chauffer-driven hovercars," Taylor said in a statement. "I said early on that we had a definite ending in mind for our story. I knew that the story we were telling in these 36 chapters was essentially the break-up of the World's Finest friendship. When Superman and Batman's relationship became irreparable, that's when our story would end. That tale is told now." However, he said, "We have another story to tell in the pages of Injustice, and that story will begin in January 2014. Injustice has been an absolute dream project. The chance to tell this epic story with the world's greatest heroes is something most comics writers, and most comics fans, would give anything for. I want to thank everyone at DC Comics, NetherRealm, the writers of the Injustice: Gods Among Us game, my good friend Kym Bagley for reading my scripts before anyone else and lastly, I want to thank every single one of you for picking up our series. If I could buy each of you a unicorn, I would."

Injustice: Gods Among Us To Go On Hiatus Until 2014