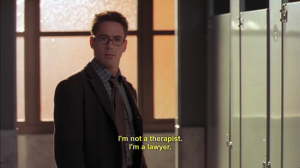 Would it be weird if, about 12 years and $150 million or so dollars removed from his stint on the hit legal drama Ally McBeal, Robert Downey, Jr. actually made a pretty overt reference to that show in an Iron Man movie?

That's what seems to have happened in the post-credit sequence in Iron Man 3, in which Tony Stark's movie-long voice-over narration finally comes full circle and it's revealed that he's been baring his soul to Dr. Bruce Banner the whole time.

"I'm not that kind of doctor," Banner tells him when he asks for input. "I'm not a therapist."

And my wife, watching the movie for the first time next to me, yelped in recognition that I hadn't had at all when I first saw the movie back in May.

"Did they really just make an Ally McBeal reference?" She asked me, and I was totally stumped.

You see, in the Season Four premiere of Ally McBeal, when Robert Downey, Jr.'s character was introduced, he took up residence in the office of Ally's old therapist. For reasons that pass understanding, Ally simply entered the office and poured her heart out to its current resident, in spite of the fact that it was a different person, and Downey's character let her do it for a while. Eventually, though, he tracked her down in the unisex restroom in the office building and started talking to her--to which she told him, basically, that he was a terrible therapist.

Manoman--therapists are in short supply these days!